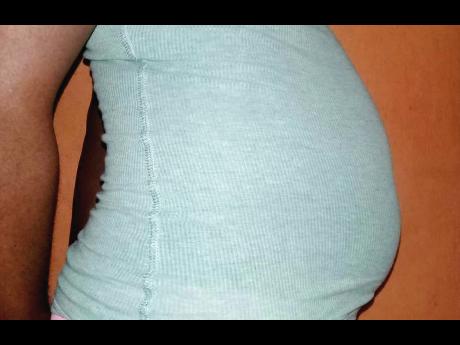 Contributed Smith shows her stomach as evidence that she really is pregnant.

Imagine knowing you are pregnant but your medical reports state different. Such is the case of 29-year-old Susie Smith*, who, by her count, is approaching her 32nd gestational week. Yet at least three ultrasounds are detecting no signs of pregnancy.

"I began seeing signs of pregnancy about three weeks after having intercourse. We usually use a condom, but on that particular night we didn't. The vomiting and the dizzy spells were out of this world. I suddenly became allergic to my dogs and cats that were always there ... I would sneeze a lot," she said.

Smith said she eventually took a pregnancy test which came back positive.

But her doctor's visit would eventually turn into frustration though as she was told that she was not pregnant.

"I was shocked when I was told I wasn't pregnant at all. I have been to so many doctors and I did a total of seven pregnancy tests, two of which came back positive. I did three ultrasounds, all of which showed that my uterus was expanding but there was no baby inside," she said.

Smith's physical appearance is similar to a woman who may be in her second or even third trimester.

Her linea nigra (pregnancy line) is evident and her breasts are already secreting when squeezed.

She told THE WEEKEND STAR that she began to feel fluttery movements from as early as eight weeks but now, the 'kicks' are more powerful.

"I am now seeing movements outside of my tummy but the kicks are more frequent now. Most of the doctors will say I look pregnant but afterwards will tell me that I'm just getting fat. Others will look at me or treat me as if I am a crazy woman. Only one of them told me that I may have a cryptic pregnancy," she said.

Cryptic pregnancies are typically carried between three and seven years due to slow growth of the foetus, caused by low levels of a hormone known as hCG.

As a result, the foetus may go undetected by mother and doctors until delivery

"I don't tell a lot of persons about my situation but everyone who sees me, believes I am heavily pregnant. However, those who know will quickly tell me that it's someone 'working' on me but I don't believe in witchcraft. I know I am pregnant. I don't know why it is not visible on an ultrasound or during a doctor's visit," she said.

Smith said she is now extremely frustrated. She said that her partner has been extremely supportive and looks towards them having a healthy baby but she is still pensive.

"I honestly don't know what's going on but all the signs are there. I really hope that I will get the attention of a doctor who can fully explain what is happening. All I know is that I am feeling everything that I did with my previous pregnancies," she said.