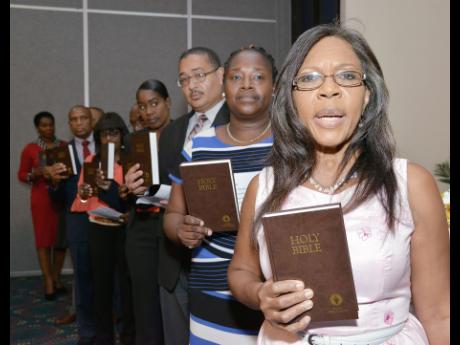 Some of the 58 new justices of the peace for St Andrew who took the oath of allegiance and oath of office as they were sworn recently.

Kenneth Grant, acting custos of Trelawny, says the parish has an immediate need for 200 justices of the peace (JPs) to serve the needs of the growing population.

"We still need a lot more justices of the peace right now. I would feel comfortable with 200 new justices to bring the parish up to par and provide greater access to justice for the citizens of the parish," Grant said in an interview with the WESTERN STAR.

There are an estimated 300 justices on record to serve the parish, including those who have migrated.

"We have interviewed 80 other persons since completing training for the batch of 21 JPs to be sworn in on September 14, hoping that we can get another batch by year end. We are really short in the parish," lamented Grant, who is also the president of the Trelawny Chapter of the Lay Magistrates' Association.

"As the president of the parish, sometimes people come to you to say, 'Sir, I have a JP in my area, but when I go to find them, they are never there, and when you find them, the timing is wrong or they are not available'," said Grant.

He added: "It is my wish that some of us as justices would step up to the plate. It would sort of ease the pressure off some of us because some of us really can do better. We can be more active, we can do some more work. I am 100 per cent for the idea of swearing in younger persons as justices of the peace because what I find sometimes, the older justices don't know the young people."