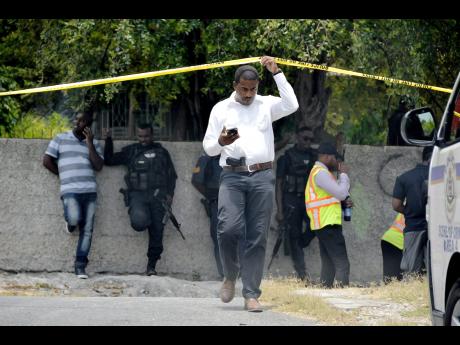 Police process the scene after a shooting on Oliver Road, Kingston, recently.

A resident of Oliver Road told the STAR team that they have been living on the edge and are being targeted by gunmen in nearby Jarrett Lane and another surrounding community.

"A bare M16 rifle dem man deh have a fire down here. Dem man deh gun make di police own look like baby. The other day a five hours worth a gunshot the man dem fire. The police dem get pin down and couldn't move because a 'baby' guns dem have," he said.

Taking a peak through binoculars, a string of bullet holes could be seen in sections of an unfinished house located at the top of a hill that leads to Jarrett Lane.

According to residents, the house was flooded with bullets after gunmen challenged the police in a shoot-out on the weekend.

"A bare empty house up the road, enuh. As it touch 5 o'clock those who live close to the foot a the hill move out and go sleep further down on the avenue, or go a road because dem no safe.

A bottle bomb or shot might dismantle dem house. A whole heap a people a miss work and nuff a the schoolas dem can't touch out," another resident said.

Residents say even the Life Tabernacle Basic School has remained closed because of the conflict.

"The man dem a move like dem no fraid a God because all the church people dem have to move dem church and bring it under a tent down the road," one man said.

An elderly resident said that the flare-up stems from feuds that started in 1978, which involved gangsters from Jarrett Lane.

"The man dem waan extend dem turf and we nah have that. Even if them say peace now, by November the war start back because a so dem craft up dem ting. If a mad man leave from round here and go Jarrett Lane, dem a kill him; it show how the man dem evil. If we did aggressive an really want war, we bun down dem board house because a bare board make dem house and dem have the nerve to a throw bokkle bomb," he said.

Assistant Superintendent of Police Dahlia Garrick said after reviewing the situation in east Kingston, the police have deployed additional personnel to the area to quell the violence.

She also added that they will continue to put strategies in place until the areas return to normality.