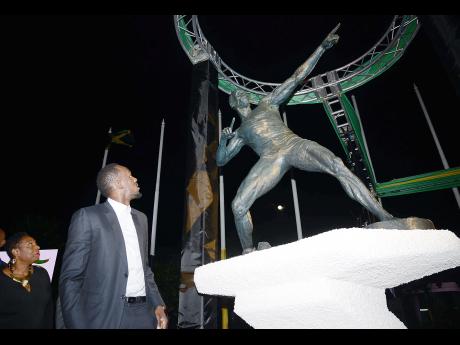 Usain Bolt looks up at his statue at the National Stadium during the unveiling ceremony last December.

The plan to erect a statue of track and field superstar Usain Bolt in Water Square in Falmouth, Trelawny, appears to be back on track, as according Falmouth Mayor Colin Gager, Sports Minister Olivia 'Babsy' Grange is to make a major announcement on the matter soon.

Bolt, who was born in Sherwood Content, some 11 miles away from the Trelawny parish capital, has no monument of note in the parish to immortalise his phenomenal success, which has made him the greatest track and field athlete of all time with his six individual gold medals and two world records in the three Olympic Games in which he has competed.

"Well, that Usain Bolt statue has been on the table, and I believe that it has received good favour," said Gager, in an interview with Western STAR last Friday. "I don't want to steal the thunder, but I am sure that at the best possible time, the minister of sports and Culture will make some announcement concerning that."

The plan to erect a statue of Bolt in Falmouth has been mired in controversy, as while some prominent stakeholders have been pushing to have the statue sited inside the Falmouth cruise ship pier, members of the general public, including some of Bolt's family members, want to have it mounted in Water Square. They claim that the pier would not be as accessible for the ordinary man.

Gager has been siding with the public, making it quite clear that his preferred location is Water Square, which would offer easy access to both locals and visitors.

"We have been pushing for the statue to be placed in the square (Water Square)," said Gager. "I was startled when I heard that they want the statue on the port (Falmouth Cruise Ship Pier). We believe it would be better suited in the square."