Gurvan Whitely gives back for the love 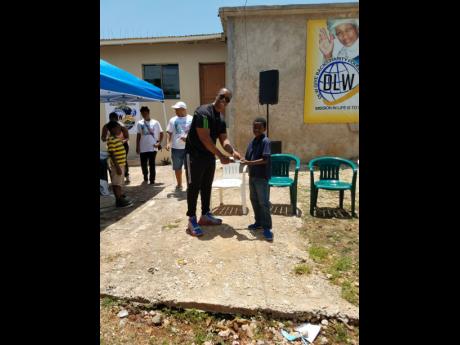 In this file 2017 photo, Gurvan Whitely makes a presentation to a student during his back-to-school treat.

If there is a song that aptly describes Gurvan Whitely, it would be Chronixx's 'Likes'.

With a smile, Whitely, who is from Bellevue in St Elizabeth and is now living in New York, said that it is his favourite song, as it is one which effectively captures the mission he has set for himself, which is to make a difference in the community from which he hails.

Almost five years ago when he hosted the first event - a gospel show - it was a way to honour the stalwarts in the community. He said that he was doing it in memory of his late mother, Doris Whitely.

He said it all started with his mother's memory, but now he hosts an annual back-to-school treat as well as the gospel concert on Boxing Day, while recognising the hard workers in the community.

"It is something to see the smiles on the faces of not just parents who are relieved for the assistance given, but the children, as they get a chance to enjoy being treated for the day," said Whitely.

"I love it. There is nothing like making a difference in someone's life. As a father myself, I embrace the children of the community. It's not that it is easy staging it each year - 'cause it's not," said Whitely, adding that it is mostly funded out of pocket with assistance from business colleagues, his two sisters and other friends.

Despite the cost, Whitely explained that he is merely following in his mother's footsteps, as she used to look out for everyone in the community.

"I do it because at the end of the day, just as my mother impressed on me the need to give back, I want my children to learn the same thing," said Whitely.

He said that the outreach programme will be expanded to now include medical check-ups and assisting the less fortunate with wheelchairs, walkers and canes.

Whitely is already putting plans in place for his annual December event, and he said that he has already identified the stalwarts who will be honoured with a plaque for their service to the community as well as the way they have impacted the lives of others there.