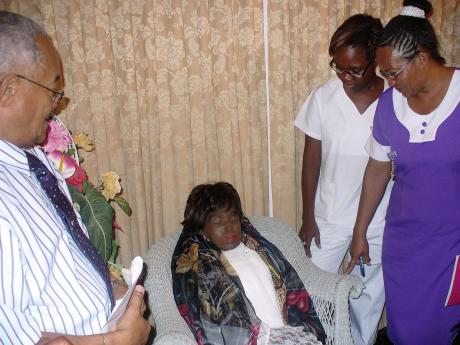 Imagine attending a funeral and seeing the corpse sitting upright, almost like part of the congregation.

This is actually one of the newest trends where funeral homes are being asked to bring the corpse to the service without putting it in a casket.

Although the trend is not yet reported in Jamaica, operator of Lyn's Funeral Home, Calvin Lyn, said that he would not be surprised if Jamaicans began requesting it.

"I have never gotten a request as such, but some Jamaicans can be such copy puss that it will not surprise me if this trend takes over. However, once we are given the clearance by the public health department, we would do it," he said.

Lyn said that while he has not brought a corpse to a church sitting or standing upright, many persons would be aware of the 'Modern Day Mummy' that oftentimes sits in the reposing room of his parlour.

The Modern Day Mummy came about after a Jamaican woman, who resided in the United States, died after returning to the island for a visit. She passed away at the Mandeville Regional Hospital in September 1997. Her remains were moved to Lyn's Funeral Home. A grandson of the deceased had identified the body and stated that he was responsible for the funeral.

The body was embalmed and the grandson said he was waiting for assistance from his father to have his grandmother's remains buried. However, a year after that the woman still wasn't buried. Twenty-one years later the corpse is still dressed up and placed in a rocking chair and can be viewed by students at Lyn's Funeral Home for an education in embalming.

According to The Mirror UK, in 2016, the family of a man who had been shot dead paid their last respect with him sitting at the funeral with his eyes wide open. The article also mentioned and showed images of a woman who died in 2014, sitting at a table with liquor and cigarettes nearby. A motorbike lover was also embalmed sitting on his beloved Honda, while another man was embalmed sitting in the driver's seat of his own ambulance.

Meanwhile, Tennyson Cornwall, operator of Tranquillity Funeral Home, said that he has received 'special' requests but none that includes the corpse being seated or standing among or close to the mourners.

"We would get the normal things like money, jewellery and liquor being placed into the caskets. Although it's a mind thing, we aim to please our customers the best way possible. So when they ask for nails and pins to be driven inside the deceased's feet to prevent them from coming them to haunt them, we will oblige for their satisfaction ... but never to have a body being outside the casket," he said.

Like Lyn, Cornwall said he would not rule out organising such a funeral, once he gets the green light from the relevant authorities.