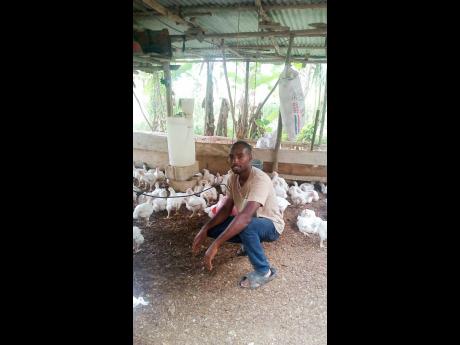 Dwight Johnson turned to chicken rearing to supplement his income.

Dwight Johnson of Chatham, St James, is channelling his energy into becoming a major chicken supplier through a three-month-old farm from which he supplies almost 1,000 pounds of chicken weekly.

Johnson, 34, told WESTERN STAR that he decided to start the chicken business to supplement his income from the carpentry work that he does.

"A few years ago, I was thinking of ways I could make some money, seeing that carpentry wasn't always available, and that's where the idea of raising chickens first came to mind. But I never acted on it until July this year," said Johnson.

"My fiancÈe had a few coops that she was not using, and so that's where I started. When I started out, my fiancÈe's father helped me to get the chickens and feed, and he was also my first supplier."

Ever since he started the venture in July, Johnson has reaped several benefits as he is now supplying chicken to four establishments. He plans to expand his business over time.

"Business is good thus far as I supply to four restaurants at the moment and I'm supplying almost 1,000 pounds of chicken on a weekly basis," said Johnson. "I'm looking to expand my market as I want to supply about 5,000 pounds per week, and in the future, I want to be a major competitor in the chicken market."

Johnson had words of advice for other young people who want to pursue their own business endeavours.

"If you are passionate about something and have the confidence in yourself, just go for it, and never forget God in all you do," said Johnson.