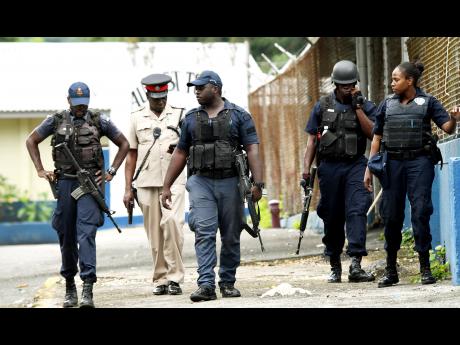 Police on patrol in the troubled August Town community earlier this year.

The police have heightened their presence in the August Town area following separate shooting incidents in the community on Friday, October 26 that left two persons dead and another in hospital.

Information received is that at about 5:35 a.m., a police team was processing a murder scene at Princess Alice Drive, Kingston 7.

While on that scene, the police were alerted to another shooting incident on Barrett Drive, also in Kingston 7, where two persons were shot at about 8:35 a.m.

One of the persons has since succumbed; the other is being treated at the hospital.

Investigators theorise that these incidents stem from an ongoing gang feud in the area.

August Town, a typical hotbed of crime, made national headlines when it recorded zero murders for 2016 but councillor for the area Venesha Phillips isn't impressed.

"Saying that there was no violence in the community is not true. Persons got shot and there was an ongoing gang feud. There was just no fatalities We have a problem in August Town with violence. I was out of the island for a month and I returned from the airport to see a dead man laying on the ground. While the crime was being processed another person was dying on another avenue," she said.

Phillips said the students of August Town Primary were so traumatised that she had to speak with them.

"Some of the criminal elements continue to use the school compound while it (the school day) is going on. They have no regard for the education system or the impact that this type of violence has on the children," she said.

Phillips said yesterday she met with members of the Jamaica Constabulary Force to find ways of reassuring the residents that they would be safe.

She added that she is imploring the citizens to cooperate with the police as they continue to maintain a strong presence in the area.