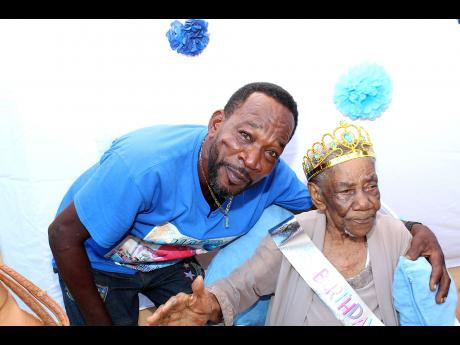 Bengaph Smith hugs his grandmother, Evelyn Johnson, on the occasion of her 100th birthday on October 20. 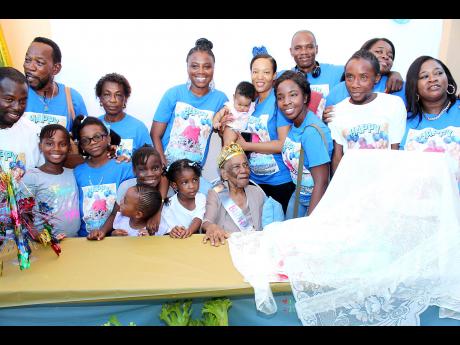 Evelyn Johnson is surrounded by her children and grandchildren at her 100th birthday celebrations in Sherwood Corner, Trelawny.
1
2

Evelyn Johnson celebrated her 100th birthday on October 20, and family and friends made sure the milestone was observed in style. They threw a party for the mother of three girls and matriarch of the Sherwood Corner district in which she has lived all her life.

Bengaph Smith, a grandson who lives in Florida, told the WESTERN STAR that he would not have missed the event for the world.

"Nothing, apart from death or sickness, could prevent me from coming to be part of this celebration. She was my mother then, and now. I hope God will give her many more years."

Fernando Henlon, Johnson's eldest grandchild said, "She taught me everything so I could survive in life.

"I learnt how to farm and cook meals from crops grown on her small farm. I learnt how to cook hominy porridge, and still enjoy cooking and eating it," Henlon said.

Johnson, a Christian woman, was the unofficial 'police' for the Waldensia Baptist Church in Trelawny before retiring five years ago.

"All the children had to be in Sunday school. If they went outside, she would go for them," said Carmen Gordon.

Edgar Harrison, a deacon at the church, said Johnson was a phenomenal woman and a Christian at heart.

"I don't know where to start. As a youngster, she kept all in line. When I became an adult and fell to the temptations of the world, she found me and brought me back to church. Here is a woman who knows the Bible, the numbers for every song in the hymn book, every sankey. She never missed a prayer meeting when the Class Four Prayer House was in operation," Harrison said.