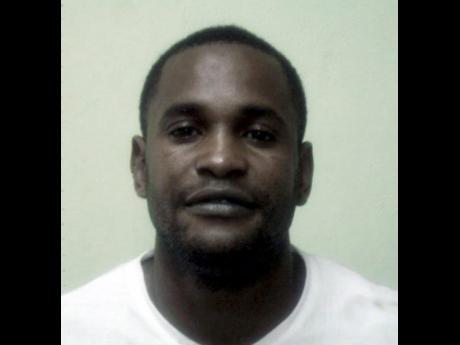 Rameish Simpson, the colourful Jamaica Labour Party (JLP) activist who was once rescued from police by member of parliament James Robertson, has been killed.

Simpson was shot and killed at his home in Logwood, St Thomas on Thursday night. His wife, who was also shot and injured, was rushed to the hospital.

It is reported that about 9 p.m. the Simpsons had just pulled up at their home when Rameish stepped out the vehicle to open the gate.

He was allegedly attacked and shot multiple times, killing him on the spot.  His wife was later shot and injured after she ran from the vehicle.

The men reportedly set the vehicle on fire before fleeing the scene. IN PHOTO: Rameish Simpson (right) and Richard Simpson sit in a police vehicle. They were arrested shortly after evading a police check point and driving into the sea in Grants Pen, St Thomas, on December 17.

Simpson came to national attention in 2009 after Robertson, member of parliament for West St Thomas and then minister without portfolio in the Office of the Prime Minister, made the 45-minute journey from Kingston to St Thomas to rescue him from police.

Robertson said Simpson was targeted by the police because he had information about their involvement in serious crimes in St Thomas.

"I have no problem. I should be knighted. A man would be dead with lies told on him," Robertson told The Gleaner at the time.

"It is with the police's knowledge that I went out to save this man who was helping the police with an investigation (and who was almost killed)."

Following the incident, the MP was charged with using abusive language at a police team.  The case was dropped after Robertson apologized to the police and the court for his action on the day of the incident and promised there would not be a reoccurrence.

Simpson again made local news in 2015 after he and his cousin were arrested and charged with the illegal possession of firearm and ammunition following reports from the police that they removed the items from a van which Rameish, in seeking to elude the police, drove into the sea.

The items were allegedly fished from the sea following what the police described as a high-speed chase, which ended with Rameish driving his vehicle into the sea in the vicinity of Grants Pen, St Thomas.

Both men were offered bail and had restrictions imposed on their movements.

In granting bail, Resident Magistrate Calise Wiltshire had said claims from the prosecution that Rameish was part of a criminal gang in St Thomas was not enough reason to deny bail.