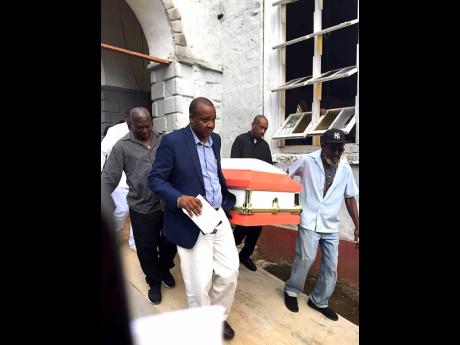 The orange border painted on Celena Green Plummer's coffin was not an accident. The Trelawny native, who died on October 19 at age 89, was described as a "loyal and dependable foot soldier" for the People's National Party (PNP). "She would always be asking what more could she do," Telka Holt, a former councillor for the Sherwood Content Division, said.

Holt was among several PNP members who gave tributes at Plummer's funeral, which was held at the Waldensia Baptist Church on Tuesday.

Former Member of Parliament Desmond Leakey said: "I don't have the record of when she joined the party. The way she loved the party, she must have been a foundation member, even though she was only nine when the party was founded," he said.

According to Leakey, Plummer never missed a PNP annual conference, which is held in Kingston.

"When I lost in 1980, it was like a part of her died. She couldn't understand how people could vote for her opponent," he said.

Leakey also remembered her as a trustworthy worker on his farm. "I could depend on her. She was very kind, and every year, at Christmas, she would bring me a basket of goodies from her small farm."

Plummer's body was buried at the Reserve Cemetery in the parish.