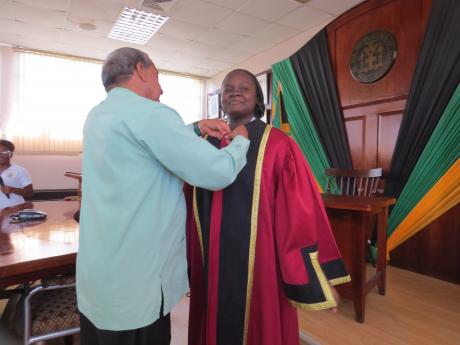 Burke, an upper sixth-form student, said her transformation came after she was asked to enter a competition which saw her engaging in public speaking. That boosted her confidence. But the courage to enter the race for youth mayor for May Pen came from her mother, Georgia Smith.

"That's my life right there," said Burke of her mother, who she said gave her a pep talk when she had doubts and felt insecure about the competition.

"She made me know that Moneague, (pet name) you can do this. We sat down together and went over my project and worked on it together. I added my concept notes," she shared on the steps leading to her being selected as the youth mayor.

Burke said that when her name was announced as the youth mayor, she felt "overwhelmed and so important".

Burke, who is eyeing a profession in the medical field, said it was actually "prophesied over her by her mother while she was still in the womb".

"My mother told me that she felt like she was carrying a doctor and that's why she spoke it over me," she said with a smile.

Already armed with 11 CSEC and four CAPE subjects, Burke is encouraging fellow youths to find their own source of encouragement and to seek to fulfil their potential.