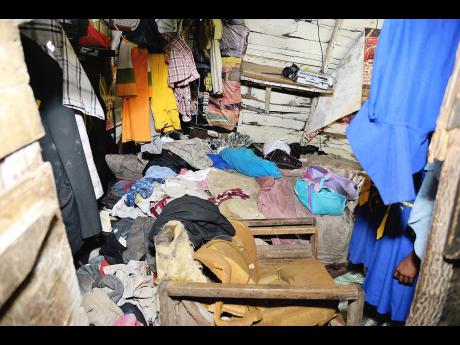 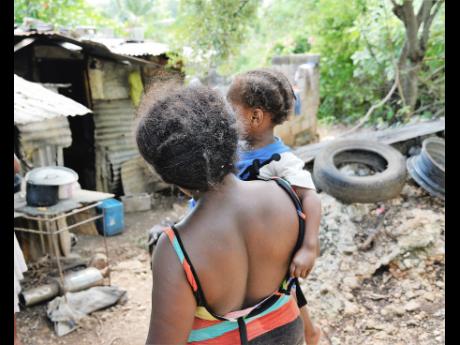 Shanice Josephs holds her youngest child as she expresses her hope for a better life. 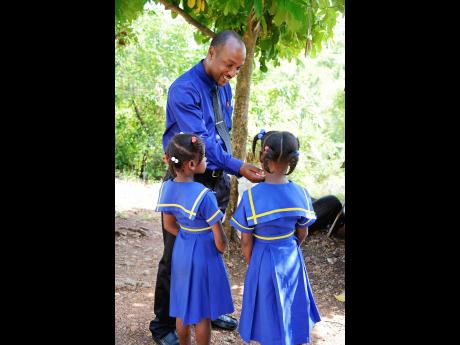 Upon spotting the news team, Shanice Josephs ran into hiding. Approximately 15 minutes later, the woman who had initially given her surname as Lewis, emerged from the bushes after much coaxing from two of her neighbours.

With her three-year-old barefooted son clutching to her dirty, tattered dress, she looked on timidly as one of her neighbours discussed her situation with the head of the May Pen Hospital, Dr Bradley Edwards, Otis James of James and Friends Education Programme, and Adrian Sinclair, principal of Effortville Primary School in Clarendon.

"Is more than 10 years them live here and mi would really wa see dem get help. Shanice wasn't always like this. I think the condition lick her head. Bwoy, sometimes mi see the kids, mi cry tears. Nuff time mi see she and dem and dem hair wa comb and dem dirty. We help them when we can but a nuh all the time mi have it," one of her neighbours said between tears.

Josephs' plight was highlighted in the CENTRAL STAR on Tuesday. The family of six, including four children, is living in a rundown shack that could collapse at any time.

Josephs' 14-year-old son also scampered away from the 'strangers' but returned shortly after. Her two daughters, ages six and seven, stood silently as they huddled close to each other.

According to those who know them well, including their principal, the children hardly ever interact with 'persons on the outside'.

"The little girls are students at my school and I think they are unable to learn because of the environment they are in. Now that I am here and see the living condition firsthand, it's worst than I ever thought. Looking at this place is heartbreaking. This is an accident just waiting to happen, this structure can fall at anytime. One of the little girls doesn't speak at all. The older one is adjusting slowly," he said.

Outside of Josephs' shack, two dirty pieces of sponge were placed outside to absorb sunlight. Mosquitoes sang in chorus inside, with their breeding site being old tyres with water on the outside.

Josephs' home is also a haven for rats and other harmful pests. Looking on with concern is Edwards, who is hoping that the family will have a new home for Christmas.

Currently, the children have a six-year scholarship from James' that programme, which also ensures that they are given daily meals. Shanice looks forward to better days where she can properly care for her family.

"Mi would wa raise likkle chicken. It really hard sometimes because nuff nights we go bed without food," she said.