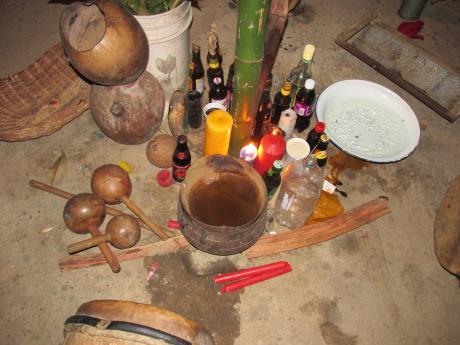 Several entertainers, politicians, and other profilic Jamaicans have reportedly confirmed their attendance for the retirement party of popular obeah man David Williams.

The obeah man's daughter, Lilian, who has been coordinating the planning for the event, said that the party would be held at a hotel in the Corporate Area on Saturday.

"A lot of awards will be given out and a special one will be given to a veteran entertainer, who has been loyal to my father for years. Two loaded guard rings will also be given away. Some of these persons are like family as they have been around me and my dad for a long time. So far, we have a long list of attendees, which also include politicians, judges, policemen and women, and business owners," she said.

PASSING ON THE BATON

Williams, who hails from St Thomas, is said to have spent 40 years assisting persons with their careers and other aspects of their life for years. The obeah man, who also celebrates his 80th birthday this month, is said to have given up his post and will be passing on the baton to others in his field.

Earlier this year, Lilian expressed her disappointment with some of her father's clients for their reported failure to settle outstanding debts. She said the majority of these persons have since paid up.

"Only two persons are yet to make full payment and they will be at the party this Saturday, where they are expected to close off their debt. If they don't make the payment as promised, then I will have no other choice than to say who they are," she said.

The woman, who has been assisting her father as he carries out his spiritual work for years, said he will be passing on a few spiritual gifts to other obeah men who will be in attendance.

"It will be spiritual awakening and a celebration for the decades of work that he has done. Eight of the obeah men that will be at the gathering will receive the gift of a stronger power," she said.

She added that her father will bestow blessings on a few faithful clients who will not be in attendance. Among them is social media blogger/entertainer Dr Love, whose song, Baby Girl, will be 'blessed' during the event.

"My father was really looking forward to having Dr Love there and is really disappointed that his schedule will not allow him to be there, but we will be sending some love and luck his way, via a guard ring. We will also be blessing one of his songs," she said.

Dr Love told The STAR that the obeah man played a pivotal role in his career.

"I am extremely busy and that is why I won't be able to make it. I have tried every way possible but I do have some work that I have to finish up, but everyone knows how appreciative I am of Mr Williams. A dem man deh make mi go Europe and a shine in other aspects of mi life," he said.