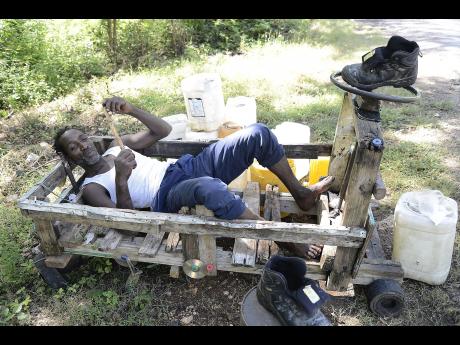 Hubert Campbell relaxes on his cart before heading off to catch water at a nearby standpipe in Breezy Castle, Clarendon, recently.

Imagine having to use kerosene lamps and bottle torches for lighting or depending on rainfall or river water for consumption in 2018.

That is the case for some of the residents in Breezy Castle, Clarendon, including cassava farmer Hubert Campbell.

CENTRAL STAR caught up with Campbell as he took a nap in his handcart along the roadway. Soon after, he said he would travel to a nearby standpipe to stock up on water for a few days.

"Most people have tank and will buy water when the truck passes by. I have been here for a while now. No pipe run through this part of Breezy Castle. Sometimes we get rainfall, but if we get too much, it's a next problem, because the gully will run cross the road," he said.

He said that the lack of street lights poses a threat to the residents, especially pedestrians. He also suggested that the relevant authorities should install a pedestrian crossing in a section of the district.

"No sidewalk is here, and more time the taxi man dem drive hard. I guess it's because a lot of people nuh really walk more time, but we have to think about the children who have to walk to school. It nuh make no sense wait until a tragedy happens to fix things," he said.

He added that although the area is underdeveloped, the district is still a haven for criminal activities.

"A lot of who a do the tings dem don't come from here. Mi no like see the foolishness at all. Mi would wa just see the place fix up so the young people dem can get work and nuh have to move out the place. Mi have mi likkle son, but mi nuh want him grow up and a raise him family inna lamp light. Not even TV him can't watch," Campbell said.