Gardens of Kingston: Back To has good people - Resident says the area isn't as dreadful as most persons believe 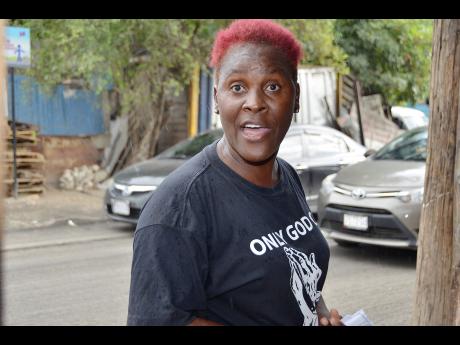 Diana Inswood says there are many good people in Majesty Gardens.

Majesty Gardens is often labelled as one of the most feared communities in Kingston 11. While a section of the area, which is also known as Back To, is nicely developed with concrete structures, the rest of the community has mostly board dwellings, zinc fences and outside bathrooms.

While admitting that there is still a lot of room for improvement, Diana Inswood said Back To isn't as dreadful as most people believe.

"The infrastructure is poor, yes, but behind these zinc fences are real and good people. Is not all of us have zinc fence mentality. Cruffs are everywhere, but some of the youths have ambition and manners. Is round here my daughter live and she going university now," she said.

Inswood is extremely passionate about the community that she has called home for the past 37 years although there are persons on the outside who would usually turn up their noses at the St Andrew South inner-city community.

Currently, traffic is being diverted into Majesty Gardens, while the road infrastructure in the Three Miles area is being upgraded. According to Inswood, it is obvious that persons driving through Back To don't have a good view of the area.

"Not everything that is posted on social media is true. A lot of times I read the comments, and I get so upset. There are decent people living here. Sometimes mi see buses a pass and people a wind up them window and act like we have some contagious disease. One time mi hear a woman a say a bare animals live round here, and it hurt mi heart," she said.

Like other residents, Inswood believes that their qualifications are not taken into consideration whenever they apply for jobs. She stated that potential employers usually shut doors in their faces because of their address.

"Mi drop off over 40 applications, and no one wants to employ me, and it's not because I am not qualified for the job. It's because of my address. I used to work with a company who tried to push me to the limit. I just leave the work because it would seem them pick on mi cause them a try see a dirty side of mi," she said.

She, however, admitted that some of the residents are to be blamed for the stigma that Back To now faces. She also implores those in her community to steer away from the illegal practices that they have grown accustomed to.

"Me used to climb light post and teef light, but that was before JPS (Jamaica Public Service) did a offer us opportunity. We never have a choice at that time, but now there is the Pay As You Go system, and I have it. I remember when people never have light in dem house and candle catch one a the houses and kill two children. The Government a try, so mi a work with the system and pay my bills now," she said.