Lost Generation: 'A part of me died with Jahshaun' - Father can't cope with son's passing 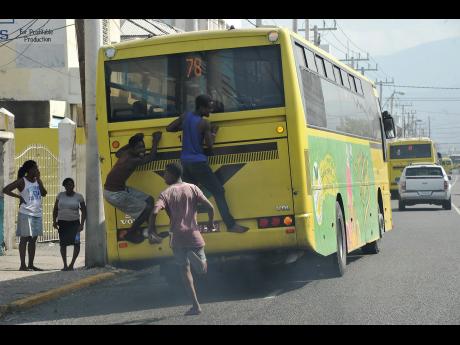 Adults watch helplessly as boys take a dangerous ride on the back of a JUTC bus on Slipe Road in Kingston.

Jahshaun Chevannes liked to deejay so it came as no surprise when he told his father Terrence that he wanted to become an entertainer like Beenie Man.

Unfortunately, the youngster will not realise his dreams as his life was cut short after he fell from the back of a moving bus in 2013.

Life has not been easy for his father, who said a part of him died when he lost his 'likkle company'.

"Mi mash up after. Sometimes I can't even remember things. Mi get sick right after. My blood pressure elevate and now I am having prostrate problems. Him was a decent likkle bwoy ... nah go say him never give mi trouble but him was a good likkle bwoy," he said.

The former Balmagie Primary School student is said to have hopped on a bus with his friends on Hagley Park Road when he fell.

"Him and him likkle friend dem decide say dem a go save dem lunch money and no take no bus, so them hop on a bus and when him a jump off him drop and lick him head back and dead same place," he said.

The 64-year-old security guard said the image of Jahshaun never leaves his memory, and he often wonders if he suffered before he took his final breath.

"The doctors tell mi say when him drop, him brain shift and then him get blind and then him dead. Mi ask if him feel no pain but the doctor say it happen so quick that him nuh feel anything. When mi look pon mi son, him lay down like him a rest. But when mi see him head back it sink in. It look like him come down on all a him weight," he said.

He recalled the afternoon that he received the call from Jahshaun's caregiver that he was killed in an accident.

"Him usually go by a babysitter after him leave school but the person call and say him nuh show up and the person go by the school go check and hear the news. Mi can't believe mi likkle bwoy dead even after mi go look pon him a Tranquillity (funeral home). Sometimes mi find myself a talk to myself ... it rough man," he said between sighs.

Chevannes said he is still trying to pick up the pieces of his life as he holds on to the memories of his beloved son.

"It's hard. I have a few pictures of him that I often look on. I have other children but they are overseas. He was my little boy. When mi and him madda break up, he lived with me and now he is not here. I can't stop asking why him," he said.