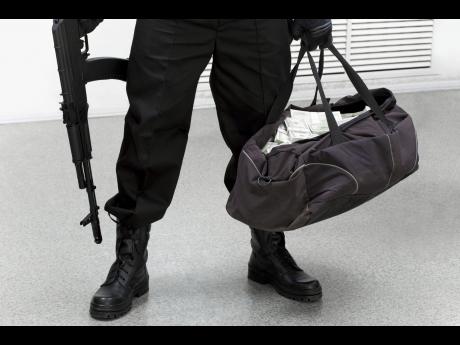 Gunmen robbed $2.4 million in cash from security guards who went to the Tastee establishment on the corner of Market and Duke streets in Falmouth, Trelawny to collect the money.

The security company, which claims to offer reliable armoured courier service, sent its officers to the fast-food establishment to collect the money on Friday. However, after collecting the cash, the guards were robbed.

"About 1:12 p.m. on Friday, the money was being transferred by a side door of the establishment. Shots were fired by one gunman in the direction of the door, pinning the armed guard inside," the investigating officer, detective inspector Simeon Hamilton told the WESTERN STAR.

"One man jumped into the car where two unarmed security officers from Excel Security Company were seated. They grabbed the bag with the money, exited the car, and made their get away in a waiting car. The lone gunman then made his get away running through the streets of Falmouth," the senior cop said.

Inspector Hamilton said the investigations are being hampered by the lack of camera footage and reluctance of people on the busy streets to tell the police what they saw.

Superintendent Winston Milton, head of the Trelawny police, said persons should be careful when they are transporting large amounts of cash.

"They should change their routine of transfers because we have found that Tastee transfers the money at the same time through the same door on Fridays," he said.

Milton said that for the Christmas season, police officers who are on administrative duties will be placed in the streets as a deterrent method to crimes being committed.