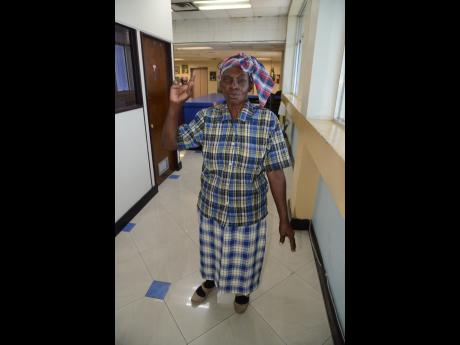 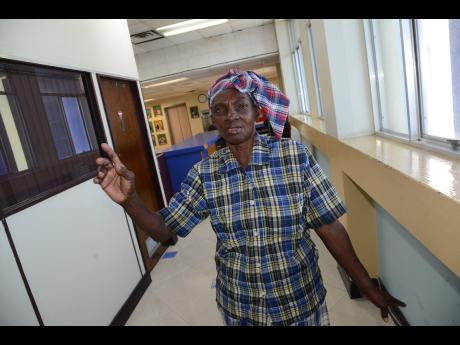 Self-proclaimed 'Queen of the Gospel' Eve Campbell says she is disappointed with a few members of the Jamaica Constabulary Force (JCF) after she was hauled away from the Norman Manley International Airport in Kingston for preaching the Word of God.

She said that she received injuries during the ordeal and she is now seeking compensation.

The 'warner woman' told THE STAR that on November 16, she went to the airport to pick up a bag from a friend, who was arriving from England that evening.

"Mi half Chiney daughter send some tings fi mi likkle son for him to sell, so mi go a di airport from early. While I was there, the spirit of God say mi must start preach, so mi start prophesying. Afterwards, a woman police in khaki and two others come and tell mi say preaching is not allowed there," she said.

Campbell said that the police asked her to accompany them to the station, but she refused to do so, telling them that she did not do anything wrong,

"I step aside and went to sit down, but the woman police told the others to put me in the radio car because I was there too long and none of the flights were delayed. I was there early because mi did a try beat the bag a traffic on the road. Next ting mi know, the police hold mi down to put mi in the car and mi drop. Is not dem push mi, mi just drop," she said.

Campbell said that as the officers tried to force her inside the vehicle, her fingers were accidentally slammed in the door and she continued to put up resistance.

"The woman then tell di male one to fix mi skirt because it ride up and mi just kick him cause him outta order. Mi go fi go kick him again, but God say mi never did fi do it cause mi don't know why him a touch mi," she said.

The 'warner woman' said that afterwards the police drove her to Harbour View, where they left her along the roadway. She then had to journey by foot to the airport to collect the package that her daughter had sent for her.

"After dem drive gone, mi nose start bleed and mi hand start hurt mi like it sprain. Mi all a feel pain across mi waist and elbow, but at first mi never go doctor mi just put some Tiger Balm on it. But mi decide to go doctor, because the pain start get worse like it a get stale," she said.

Yesterday, Campbell visited the Kingston Public Hospital to undergo a medical examination. She said that she will inform the Inspectorate of Constabulary (IOC) of the results.

"Is over 30 years mi a preach, and dem tings here never reach mi yet. Mi preach out a airport all the time because when God tell mi to do a ting, mi can't be disobedient," she said.

When THE STAR contacted the Kingston Eastern police, they said that they were unaware of the incident. However, Campbell showed our news team a copy of her police receipt and the statement she gave to the IOC.