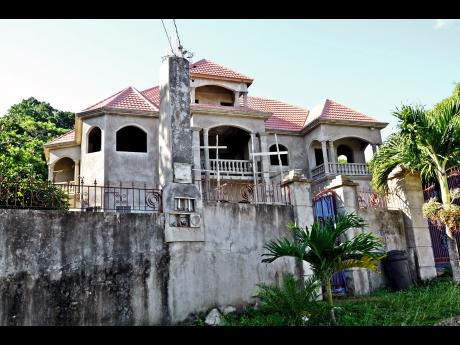 The body believed to be that of Karen Brown was discovered on this property on Sunday.

The body of a woman from the United Kingdom (UK) who was reported missing from her Jamaican home in Boscobel, St Mary, is believed to have been found in a shallow grave on the property on Sunday.

The police say DNA tests are to be conducted to determine if the body is that of Karen Brown.

One man, who is said to be the caretaker of the property and who had reported the woman missing, has been detained in relation to the incident.

"Following preliminary investigations, the person who reported her missing was taken back to the station on Wednesday, further interviewed, and taken into custody," Clarke said.

Clarke said that follow-up investigations resulted in a further detailed search of the home.

"The police were pointed to a shallow grave where we exhumed a body believed to be that of Karen Brown from the said property. We're awaiting a post-mortem where DNA testing will be done to confirm [the identity]," he revealed.

The operation to retrieve the body was conducted between Sunday and Monday.

Further reports reaching THE STAR are that the woman recently returned to Jamaica, and that the house at Boscobel was under construction.

When THE STAR visited the property in the Paradise Edge area of Boscobel yesterday, three high-end vehicles were seen parked in front of the massive, unfinished structure, with blue plastic draped over the gates to keep out prying eyes.

Residents said that they do not know much about the woman, except that they would see her driving by whenever she was in Jamaica.