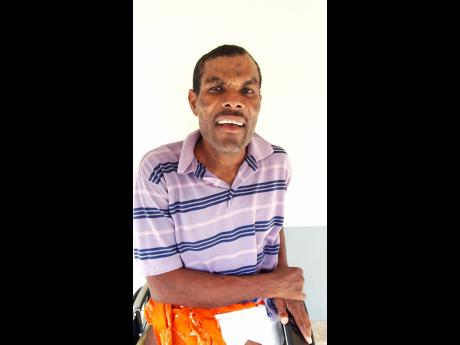 Dennis Green, 46, has been forced to make the Falmouth Public General Hospital in Trelawny his home for the past nine years.

Green, who is paralysed, told THE WEEKEND STAR that he was performing a good deed when he got injured.

The man, who is from Crown Land in Trelawny, said that he survives by begging money from people who visit the hospital. He said that he uses the donations to buy diapers.

He told THE WEEKEND STAR that he does not have children. And although he has two brothers, he said that only one of them visits him.

Meanwhile, Ken Grant Jnr., chairman of the hospital, said persons like Green are taking up much-needed bed space at the hospital.

"They are costing an average of $15,000 per month to maintain them and also occupy critically-needed bed space for sick people. It cannot be right for these healthy people to be in the hospital, costing taxpayers to keep them there," Grant told THE WEEKEND STAR.

Under Jamaica's Health Act, hospitals are places of safekeeping. Health Minister Dr Christopher Tufton last year told THE WEEKEND STAR that by policy and legislation, social patients are not to be put out on the streets.

"It's partly the reason why we have so many social cases in the hospitals because persons drop their loved ones or family members at the hospital, and they don't pick them up. Even with efforts from the hospital itself to make contact, family or loved ones don't accept them," the minister had said.

Meanwhile, Hammer Mouth appears to be in no hurry to leave the comfort of the hospital.

"Mi madda and fadda dead. None a mi bredda dem nuh have it. Sometimes mi woulda like go home, but mi nah go have nobody fi tek care a mi, so a betta mi tan yah. Sometime mi tiad a de hospital food, and when mi have a little change, mi beg a warder fi buy piece a chicken fi mi," he said.