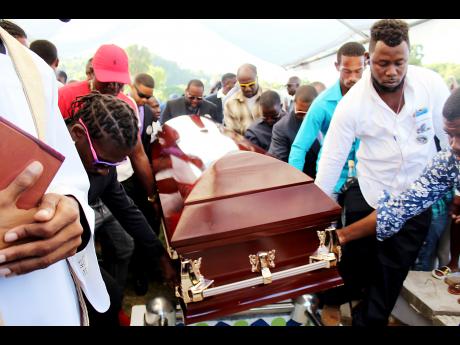 The Reverend Father Kirk Brown began his homily at the thanksgiving service for Bruce 'Bigga Don' Chin by singing Buju Banton's 'It's Not An Easy Road'. As members of the church joined in, the pastor quickly urged them to hold back.

"Like Buju sang, it is not a bed of roses for the Chin family. They are going through traumatic times. These, however, are the realities of life. This afternoon they face one. In the midst of life there is death," he said.

At Bruce's service, which was held at the Church of St Michael's and All Angel in Clarks Town, Trelawny on Saturday, his brother, Richard, spoke about his love for trucks and family.

"He grew up with a love for automobiles and started driving from age six. He graduated into a master trucker, and I know he is gone to a truckers' paradise. My brother never missed an opportunity to talk about trucks, until one day he said to me, 'I have found a Nash'. I thought he was talking about a brand of truck, only to find out it was the love of his life, Nasheka Henlon. A year ago, she made him a father when his daughter Lillyann was born. Then he mixed his conversation about trucks with his love for his daughter, often boasting that he was the world's greatest father," Richard said.

Eddie Chin, a cousin and fellow trucker, described Bigga Don as "the teacher for all the young truckers coming into the business.

"He was the master of the 18-speed. Once there was a little space, he could put the trailer in there. We will miss the sound of him gearing down as he comes in to park," Eddie Chin said.

As a mark of respect, truckers drove their trucks through the main street of Clarks Town before and after the service. They formed a guard of honour from the exit of the church to the burial spot in the churchyard. Bruce was buried beside his father.