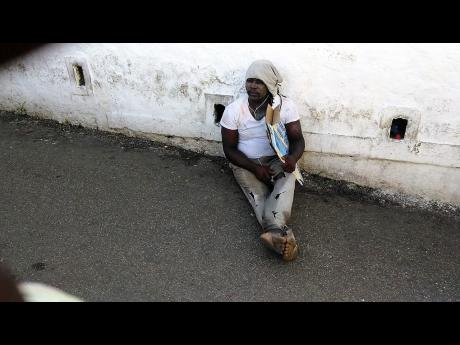 Otis James, director of James and Friends foundation, tries to walk in the shoes of a homeless man for the day. 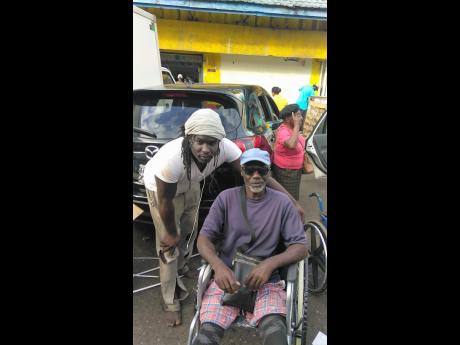 Otis James (left) poses with Stumpy, after giving him a new wheelchair.
1
2

Otis James of the James and Friends foundation decided to go on a 'fact-finding mission' of what it is like being homeless. He said the experience has been quite revealing.

James said he has always seen homeless people roaming the streets, and although he gives them a handout from time to time, he never really thought of what it is like to be in their shoes. That was until he disguised himself as one such unfortunate person and decided to hang out on the streets of Mandeville, Manchester, recently.

"Being a homeless street person changed my life a lot. It showed me a different side of things," said James.

Sharing his experience on the street, James said he was abused, spat at, scorned, and even had water thrown on him.

He said that he engaged the homeless persons in conversations and found them to be very warm.

"They are genuine and it broke my heart when I heard some of their simple wishes. One said that for years all he wanted was to have a meal in a restaurant, upstairs a shopping complex that's all. Another wanted a wheelchair, while another just wanted ice cream. Their wishes were so simple anyone could have fulfilled them," he said.

"We have to love and help each other," James said. "Seeing them close up, struggling for a meal, seeing the cruelty meted out to them, it has made me a different person from how I used to me."

James said pretending to be homeless was both eye-opening and heart-rending. He said that he knew that at the end of the day he would change his clothes and return to his relatively comfortable life.

Last week, following his experiment of about two months ago, James went back to the town to visit some of his new 'friends'. He said that he took one to a restaurant and bought him food. He also presented a new wheelchair to one of the men, who is known only as 'Stumpy' and 'Oney'.

James said that he feels good, having made those contributions, and is hoping more Jamaicans will find it possible to reach out and help people in need.

"Remember, every street person is somebody's brother or sister. It doesn't matter the condition, remember things can change tomorrow, the street person can win a lotto prize and may help you. Life is valuable and important, and never believe that today gonna be for you forever. Try to be one another's keeper," he said.