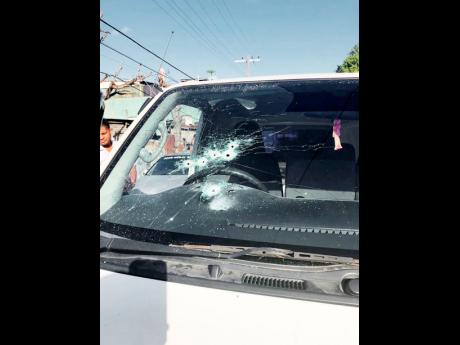 The windscreen of the courier van was riddled with bullets as the driver and a security guard were cut down by robbers in Montego Bay on Sunday.

Based on the precision with which Sunday morning's multimillion-dollar robbery and double murder in Montego Bay, St James, was executed, some persons, believe those involved were highly trained.

"If you look at the accuracy of the shooting, especially the bullet patterns on the windshield of the two vehicles that were shot up, plus the smoothness with which the robbery was executed, it showed a level of sophistication," an ex-policeman told the WESTERN STAR yesterday. "I believe it was done by persons with some amount of training."

According to the ex-lawman, 'regular' criminals tend to 'lick shot' (fire randomly) and tend to be very sloppy, which usually reduces their level of accuracy.

According to police reports, shortly after 8 a.m., a courier who was picking up cash from business places in downtown Montego Bay, and a HawkEye security team, which was escorting, was attacked by the robbers. The driver of the courier vehicle and one of the security guards were killed.

identity of the robber

The robbers stole the cash, which was initially stated to be between J$10 million and J$20 million, which the courier was transporting.

Superintendent Vernon Ellis, the commanding officer for St James, appears confident that the identity of the robber should not remain a mystery for very long.

"We are following some strong leads, and I want to ask the business community to remain calm as we intend to hunt down and arrest the perpetrators," said Ellis.

Since the start of the year, brazen robbers have been targeting businesses in the Montego Bay business district, especially those run by Chinese nationals, who are known to keep large amount of cash at their business places.

It is believed that many of the gangsters are former lottery scammers who have turned to armed robberies to maintain their lavish lifestyle.