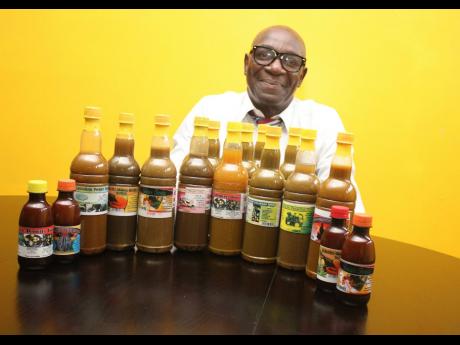 Trevor Farquharson with some of his products.

Despite growing up around herbs, Trevor Farquharson never thought he would get a vision that would lead him to use them to rid people of their ailments.

He told CENTRAL STAR that for the past 16 years, he has seen various illnesses, from the mild to the severe, affecting those who seek his services.

"I am a testament to the power of the herbs. I was diagnosed with diabetes, and, after researching, I found a variety of herbs that have helped me tremendously. You have the fig leaves that I dry and boil with other things and have as a tea ... since I found this, I have not really placed great [reliance] on pills," he said.

He even said that one customer has beaten the dreaded HIV because of his herbs.

"One day, my sister in America called me and told me about a lady she knows that was HIV positive. She asked me to send up some medicine for her and after researching it, I did ... blend of calabash, oregano, and 'spinning nettle'," he said.

Farquharson explained that he soon received word that the woman was flourishing and that her doctor could no longer find the virus in her body.

"Her hair was dropping off, and her body was covered with bumps. After she got the medicine, everything changed, and she was advised by her doctor to continue whatever she was doing. She even ended up getting married," said the herb man.

With no formal training in the area, Farquharson attributes all that he does to God. He said that he can never take the praise bestowed upon him by satisfied clients as he believes that the power does not lie in the blends, but in the one who gave him the ability.

"When I got that vision, I heard the voice of the Lord saying, 'Trevor, I invest in your right hand', and I can tell you, the Lord has blessed these hands. If I plant anything, it bears more than anything. Prior to the vision, I had no idea about calabash and I use it in almost all of my products now, among other herbs that the Lord has revealed to me."

He added that he has had people with herpes, cancer, related illnesses, and various pains and discomfort come to him for medicine.

"I have people from all over Jamaica who come to me. I get calls every day, and there are even people who have travelled from Florida, New York, and other areas in the United States to Jamaica to see me. Just the other day a man who the doctor told they would amputate his leg got a blend from me. The young man, whose foot was severely swollen with a massive piece of overgrown flesh, is inna shoes now and a walk. Can you believe that?" Farquharson revealed.

Currently based in the Mandeville Market, Farquharson said that he hopes to be able to continue his ministry through Jesus Christ by helping people with their needs.