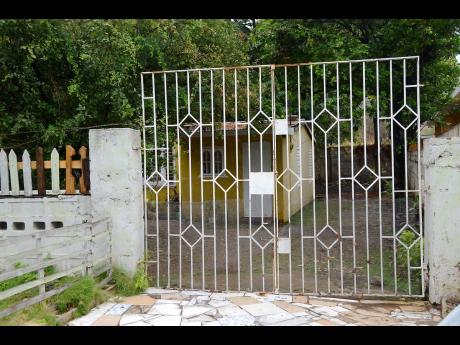 The premises on McIntosh Drive, off Mountain View Avenue, in St Andrew, where a man hanged himself after trying to kill his spouse.

A domestic dispute yesterday on McIntosh Drive in Mountain View, St Andrew, ended fatally when a man killed himself after attacking his common-law wife and leaving her for dead.

Information reaching THE WEEKEND STAR is that the now deceased man, known only as 'Suddy', took his own life after hitting his common-law wife in the head with a stone early Thursday morning.

His body was later cut from a rope that was hanging from an orange tree in his yard.

Yesterday, when our news team visited the community, residents who lived as close as six houses away from where the tragedy took place were unaware.

However, a woman told THE WEEKEND STAR that the estranged couple was overheard in a heated argument on Wednesday.

"A inna di week di man plant up dem flowers deh and pick all breadfruit for her, clean up yard and everything. Mi know dem did a argue yesterday, and mi overhear him say to her: 'After 19 years, you nuh want me'," the woman said.

Our news team gathered that during the alleged argument on Wednesday, the deceased man was locked out of the house.

A resident, who claims to know the couple well, said: "She lock him out all the time, and him haffi stay lock out, him can't go in. Him haffi stay out, so I don't know how him manage fi get to her."

But, a distraught relative told our news team that the information they received was that the deceased man attacked the woman in her sleep.

"Is a block him tek drop inna her head inna her sleep, then use it beat her in her head," the relative said.

Another resident added that the two recently moved to that section of the community, but in no time others learnt of their constant quarrelling.

"Him nuh really live there with her, enuh. Apparently, him stay a the next house, but go and come here. She mussi tell him fi stay up there and she stay here, but it cause a problem. Every minute dem a cuss cuss, constant argue argue. She just nuh want him nuh more," the resident said.

Reports from the police are that about 2 a.m. the couple had an altercation where a stone was used to inflict wounds to the head of the woman.

The police say they were summoned to the residence, and, upon arrival, they saw the woman lying in a pool of blood inside the house.

During further checks of the premises, Suddy's body was seen hanging from a rope.

The woman was rushed to hospital where she remains in stable condition.

This incident follows sharply on the heels of Wednesday's murder-suicide, which occurred on Woodpecker Avenue in St Andrew. In that dispute, correctional officer Patrick Gowans shot his wife, Rouleene Clarke-Gowans, then killed himself.