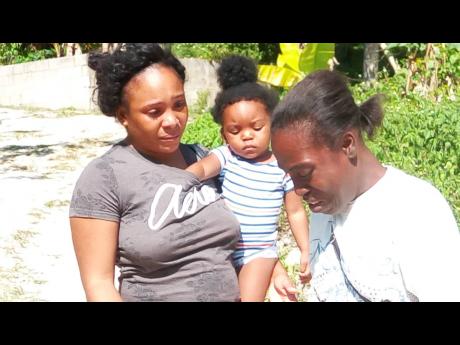 Diana Whitely (right), mother of two year-old Sasha Gaye Dennis, in tears as she related how her young daughter met an untimely death. Her cousin, Meresa Anderson (with her baby, Rikela Reid), gives a listening ear. 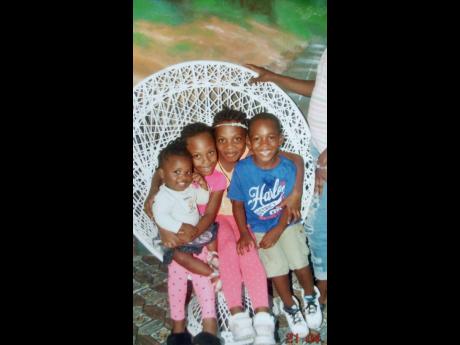 Young Sasha Gaye Dennis (left) and three of her sibblings.
1
2

Thirty-four-year-old Diana Whitely, the mother of Sasha Gaye Dennis, the two-year-old child who was mowed down in a hit-and-run accident in downtown Montego Bay, St James, on Tuesday night, said that her daughter was on her way to being Jamaica’s next dancing sensation.

“Munchie [as Sasha Gaye is called] loved dancing more than anything,” she told The STAR. “She was a brilliant girl fi har age,. Mi know seh the way how she love dancing, one day she would a be one of Jamaica’s next dancing star.”

Reports reaching The STAR are that shortly after 7 p.m., on Tuesday, Whitely and her four children were on their way back from a beach, located along Jimmy Cliff Boulevard, in Montego Bay. On reaching the east-bound lane that separates the Jimmy Cliff Boulevard and Howard Cooke Boulevard, a motorist stopped in order to allow the family of five to cross the roadway. However, a white Nissan Note motor vehicle sped around the car that stopped and mowed down Sasha Gaye and her 10-year-old sister, Hanesea.

After discovering that he had knocked down the two juveniles, the driver reportedly came to a halt, and a male passenger who was travelling in the front of the vehicle, jumped out. A frightened Whitley and dozens of commuters started to scream at the driver, indicating that the baby was still underneath the car.

The driver reportedly ordered the passenger back into the vehicle and sped away, dragging Sasha Gaye for several metres.

“I have five children, Munchie is my baby and she is my everything. Everyday she would amuse all a wi with some big people question, and with her dancing,“ the mother said.

Whitely has five children, her eldest being 17-year-old Jari Tomlinson; Hanesea, is now in hospital after being seriously injured in the hit-and-run; Shanesa Palmer, eight; Taeshawn Palmer, seven, and the baby Sasha Gaye.

“Munchie help keep all a wi together. Everybody love har and amused by her dancing. Mi not working now, but mi two sisters them live abroad and them and mi aunty who live next door help mi fi tek care a them, and fi ensure seh them have a happy home,” the mother related.

Beverly Drummond, grandaunt of the dead infant, told The STAR that she too remembered Munchie as a dancing star.

“Mi never si a little pickney so promising and love to dance so much,” the aunt stated. “Sometimes when yuh down, Munchie would just come in front a yuh and just bright up your day with har dancing.”

“The police them seh them launch manhunt fi the driver, but mi a beg him fi mek things easy fi all a wi and turn himself over to the police,” Drummond said.

Meanwhile, one senior policeman yesterday said investigators expect to make an early breakthrough in the case. He said that they have traced the ownership of the vehicle to a male who resides in Yallahs, St Thomas.