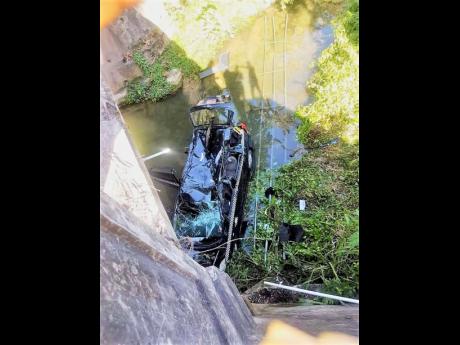 A taxi carrying Edwin Allen High School students plunged into a river yesterday after colliding with another vehicle. Eleven students were injured.

Nine students were admitted to the Percy Junor Hospital and two transferred to the Kingston Public Hospital after a taxi in which they were travelling careered off the Grantham Bridge and plunged into the river below after colliding with another vehicle.

"It was like a movie," recounted Smith, who said she had been waiting for a taxi to transport her daughter to school.

Smith also criticised onlookers who were more interested in using their cell phone cameras to record the aftermath of the crash than help the injured students.

"I have always voiced the opinion that rural parts need proper transportation for our students," he said. "It is not right to have 12 persons in one car!" he said.

Walters also said he would like the Jamaica Urban Transit Company to start providing buses to transport students on the May Pen to Frankfield route.