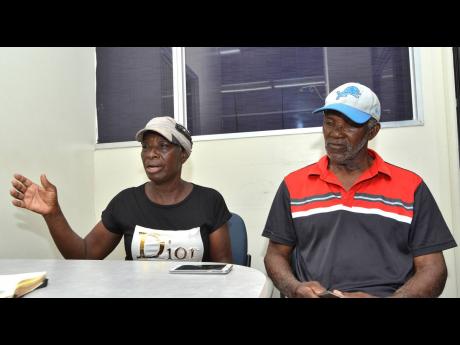 The past seven months have been the most agonising for Nora Palmer and her husband, Rodrick.

Not only are the elderly couple still mourning the loss of their son, Andre, but his mother said that it is even more painful not knowing what or who caused his death.

"I contacted the forensic lab several times, and they told me it wasn't ready yet and I should call back in March. I did that, and they told me to make contact with the police that was dealing with my son's case, and when I went to him, he told me to go to another officer to get the certified copy of the autopsy. But when I went to her, she told me that she didn't see it. I really don't know what's happening ... we need closure," she said.

Andre's body was found on October 27 on a construction site in the Corporate Area that he had been securing.

She stated that to this day, the details of his death remain conflicting as she is uncertain if her son was murdered.

"The police did tell me that they had found three spent shells beside his body and traces of blood, while other persons are telling me that he may have fallen and broken his neck. I am not getting much information," she said.

According to Palmer, her husband has not been dealing with the loss well and has grown even more ill in the past seven months.

She added that they are now experiencing major financial challenges as their son was their breadwinner.

"It is very difficult because we don't have anything. People have to be giving us stuff, and there is this lady with a shop who help us out at times," she said. "My son had an insurance policy, but we can't get anything without the autopsy report and death certificate. My husband health has got worse since Andre died. Him can barely walk now."

She said that Rodrick cries every day and that sometimes it's hard to accept that their son is really gone.

"He is the best son anyone could ever ask for, and now, his body is beneath the earth, and we don't even know what cause him to be there. Mi feel it bad, but his father not coping good at all," she said.

Efforts to contact the investigating officer have proven futile.