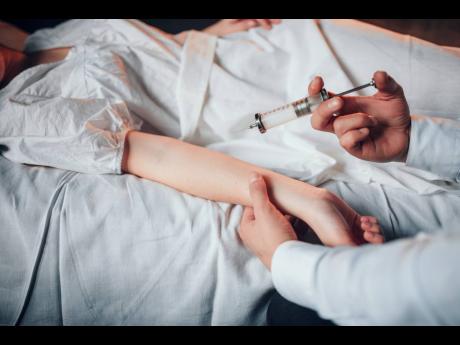 A British woman who was "nearing orgasm " suffered a stroke and passed out in the bedroom. According to the British Medical Journal, "the patient reported nearing orgasm while receiving oral sex from her partner before losing consciousness".

Commenting on the development, Dr Winston Dawes, the chief executive officer of Mahogany Health & Fitness in Kingston, told THE STAR that persons with underlined medical issues may suffer similar fate.

"In the excitement, the blood pressure goes up and the heart races. If you have an aneurysm, you will end up getting a stroke like the lady had," Dawes said.

Dawes said that women are not the only ones at risk as men who take performance drugs, such as Viagra, are at risk of heart failure. He said that while these risks are there, people should not fear doing oral sex because it is only a handful of people who encounter these unfortunate events.

"If you have narrowing of the arteries, it will be bad. In the excitement, you can have a heart attack. People have sex every day and nothing happens to them. There is a risk, but it is minimal. There is a risk in crossing the road, yet we do it. It is only every now and then something happen," he said.

The doctor said that the only danger oral sex poses for persons is if they are doing it with someone who has an infection.

"There is no greater risk with oral sex. People say that doing oral sex may cause cancer in the throat but that is not so. Smokers and tobacco chewers have a greater risk of getting throat cancer than persons who do oral sex. Oral sex is safe unless the person is sick," he said.

Professor Marvin Reid said that there have been instances where oral sex is linked to throat cancer.

"There is a link between HPV and throat cancer; one way to get it is through sex. Within that context, there is some degree of association between both, but the question is, what is the strength of the association? The most significant risk of throat cancer is really smoking and alcohol," he said.

Dr Shane Alexis said that persons with underlying health issues are at risk of having cardiovascular problems and other issues during sex. He said that because of this, people should take the time out to check themselves and ensure they are in good health.

For those who suffer from ailments such as diabetes and hypertension, he encourages them not to take other substances such as tobacco, Viagra or even alcohol while they are on medication as it can have adverse effects.

"Orgasm in and of itself is not the problem. Sex itself involves release of hormones and adrenalines and that increases our heart rate and pulse rate and in the case where persons have underlying problems such as hypertension or heart disease or diabetes or a combination of all ... . You should take care of yourself because if you are married or in a relationship where you are sexually active, doing what you normally do could be a problem," he said.