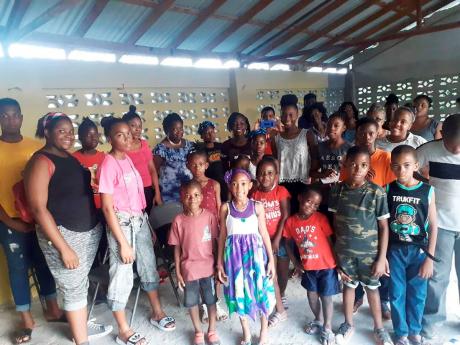 Youth members of the Miracle Tabernacle Church of God of Prophecy with some parents who attended the forum.

Last Saturday afternoon parents had their ears opened to the kind of songs their children have been listening to and singing.

As the intro to Laa Lee's song was played, the teens reacted with glee, until Taylor started reading the lyrics.

Parents expressed shock at the lewd lyrics, with one admitting that she heard her six-year-old singing parts of the song but thought it sounded like a nursery rhyme.

Rihanna's Love On The Brain and Man Down, when put under the microscope, came up short.

Taylor said that Love On The Brain could be used as an explanation of why women stay in abusive relationships and that Man Down could easily be viewed as a song that was promoting murder.

Other songs that came on the 'radar' were Teejay's Up Top Boss and Popcaan's Inviolable.

Ripping the lyrics to pieces, Taylor asked: "Were you aware that songs like these are on your children's playlists?"

Several parents admitted to hearing the songs for the first time and said they really weren't paying much attention, as most of the times the children had headsets on.

Some youngsters, who were at the forum, said while the songs were not played at their homes, they got their fill of them when they took taxis to school and while at school.

"When music hits you, you should feel no pain. Sad to say, some of these songs are painful to listen to, and if our children act on them, they will inflict pain," Taylor said. "Some of you parents need to get more social media friendly, otherwise a lot of things will escape you."