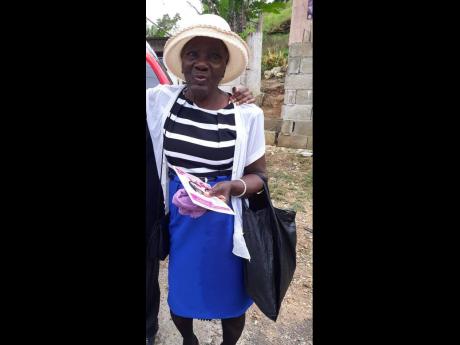 Detectives attached to the Freeport Police Station in Montego Bay, St James, have now arrested and charged a man in connection with the murder of 74-year-old Evelyn Blair, otherwise called Miss Daughter, who was burnt to death in Lima district on May 25.

The accused has been identified as Nickala 'Oil Mine' Facey, a labourer, also of Lima district.

Facey was picked up in Lima last Saturday and placed before an identification parade on Saturday, June 8, where he was pointed out by an eyewitness who allegedly saw him set Blair on fire. He was charged with murder on Sunday.

The elderly Christian woman, who many remembered as a prayer warrior, succumbed to severe burns at the Cornwall Regional Hospital after she was doused with gasolene and set on fire by a male. The man allegedly attempted to rape her at her one-room board dwelling house earlier that morning.

Reports are that shortly after 3 a.m., on Thursday, May 25, Blair was at her one-bedroom board dwelling house, when she was allegedly attacked by Facey, who attempted to rape her. She managed to fight off her attacker with a machete, and he ran from the house.

The grandmother then telephoned her daughter and told her about the incident. Later that morning, while walking along the roadway, she was attacked by a man who poured gasolene over her body and set her on fire.

The daughter, who heard her mother crying for help, grabbed a bucket of water and threw it on her. The elderly woman was then assisted to the Cornwall Regional Hospital where she died a day later.