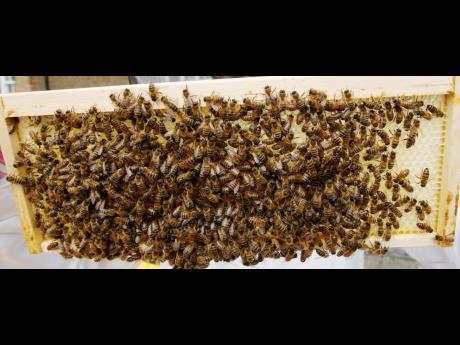 Bees thieves have been raiding apiaries in the parishes of St Thomas, Clarendon, and St Catherine, leaving farmers in a quandary.

The Apiculture Unit of the Ministry of Industry, Commerce, Agriculture and Fisheries (MICAF) has been receiving reports from beekeepers in the parishes that they have been losing honey bee colonies, honey and beekeeping equipment from their apiaries due to theft.

The criminals reportedly entered premises occupied by four farmers and removed 73 bee colonies having double and triple chambers valuing more than $3 million. The theft of items from these apiaries has followed similar reports coming from Manchester and St Elizabeth in January.

Beekeeper Roy Murray told THE WEEKEND STAR that his apiary in Pamphret, St Thomas, was severely affected by theft.

"I went to the Apiary early February, and I realised that they had taken away some 12 hives of bees. I had 30 hives there. Those included double box, single box hives. You're talking about a total of over $400,000," he said.

Murray said that this is not the first time that thieves raided his apiary, but it was normally on a lower scale.

"Usually they take equipment and one or two hives. But when somebody go in and actually take the hives, you get hit hard. You invest a lot of time into those bees, plus you lose the production from the hive," he said, adding that he has since moved his bees.

Earlier this month, THE STAR reported the story of Lance Gordon, a beekeeper who said that his bees were stolen from his apiary in Eleven Miles, Bull Bay.

"I normally visit my apiaries every two weeks. Last Wednesday (June 5), I decided to do my routine inspection. That's when I found out that they have stolen 28 colonies of bees," he said, adding that the bees are valued at more than $1 million.

Gordon had offered a reward of $10,000 at the time for anyone who had information about his missing bees. But with no one coming forward, he has decided to increase the reward.

"I want to offer $50,000 this time. We need to know who these culprits are and fast, because this is putting more bee farmers at risks," he said.

Anyone with information about Gordon's missing bees can contact him at 876-808-9665.