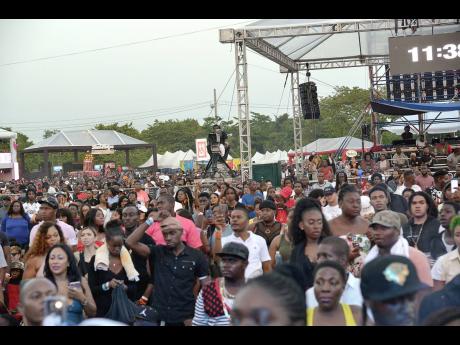 Patrons were locked into the performances at Reggae Sumfest last year.

Ahead of this year's staging of Reggae Sumfest 2019 in Montego Bay, Tourism Minister Edmund Bartlett is optimistic that the tourism industry will reap big rewards from the anticipated turnout to the annual musical extravaganza.

"Generally speaking, the tourism industry is well prepared for Sumfest, and I expect good things from Sumfest this year even though I don't have the exact figures such as how many rooms have been assigned for it," Bartlett said in an interview with WESTERN STAR. "I think that we really enjoy high occupancies (in the hotels and villas) now.

I think some people are being challenged to find rooms in some quarters, but I do believe that the organisers have already made their arrangements with the hotels, and no doubt, have settled on room assignments.

He noted that the industry was doing very well with growth at nearly 11 per cent for 2019.

"And Montego Bay is 'hot,' so I expect good things from Sumfest," he said.

Bartlett's hopeful forecast strengthens an earlier observation by Sumfest organiser Joe Bogdanovich that the seating demand has been greater than it was during last year's staging.

"Hotels in the Montego Bay area usually see an increase in bookings around the period the show is being held, but this year, I know for sure the demand has been greater.

"I am not surprised some people can't get hotel rooms right now because based on the ticket sales, the demand for the show this year has been overwhelming," Bogdanovich said in May.

Reggae Sumfest 2019 is anticipated to host more than 1.4 million patrons, with headline acts like Beres Hammond, Buju Banton and Chronixx expected to draw the crowds.