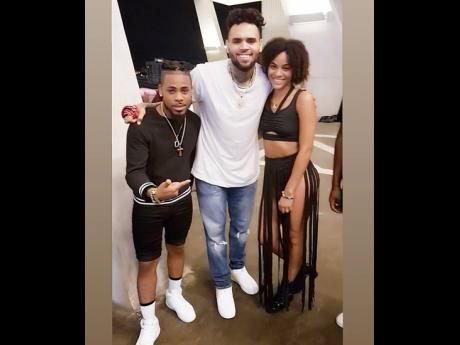 Dancers Domani Black and his wife Jay share a moment with superstar Chris Brown at a recent video shoot.

Imagine meeting your idol, and having him or her be just as in awe of you?

This was the experience of Jamaican dance choreographer Domani 'Patroy' Black when he met one of his inspirations, Chris Brown, recently.

Alongside his dancing spouse, Jay, Black brought some dancehall flavour to the video shoot of Brown's top 10 Billboard chart single, No Guidance, which features Drake.

"My wife and I were there as a unit among 200 people on set, and we were vibing up the place with some Jamaican and dancehall steps, and all eyes were on us," he told THE STAR. "The Jamaican vibe is different. Once people see it, they just have to be in tuned with it like, 'Where are these guys from?'"

Black noted that on day two, Brown came to them and said, "You guys are so amazing, keep doing what you are doing and hopefully you'll be successful."

"It was so inspiring to hear that from him and though we personally didn't get to show him any Jamaican moves, I'm pretty hopeful that we are going to be part of his brand and will be working with him in the near future," said Black.

This milestone comes less than seven months after the Florida-based dancer told THE STAR of his desire to put dancehall moves on the world stage.

He said he received the opportunity courtesy of a friend who knew he is a fan of Brown.

While the Loyal singer was charmed by the talent of the couple, Black shared he also learnt a good deal being around Brown.

"There were so many things to take away. I was very inspired on a different scale just to see him dance and sing, it was magical and almost surreal to experience all of that," he said. "In his pictures and videos he looks darker, but in person he looks so light-skinned. He is also so positive. I remember during the video shoot there were a lot of negatives happening and he changed the atmosphere; Drake did as well. The video is almost like a movie with a lot of comedy, and it was fun to see Chris Brown and Drake laughing and talking. Being in the same vicinity as them was motivational."

No Guidance is one of 32 tracks on Brown's Indigo album, which is number one on the Billboard 200 album charts.

Black said his appearance in the upcoming video is not only a boost for his career, but for dancehall.

"We should all try to be more international, let dancehall reach other people. Once they see our vibe, they want to have it, and that is something we should embrace," he said. "I am not only doing choreographies and classes, I'm growing on the international scene, and a lot of international artistes are reaching out to me to go on tours, do stage shows and music video performances because of that Jamaican culture and vibe."