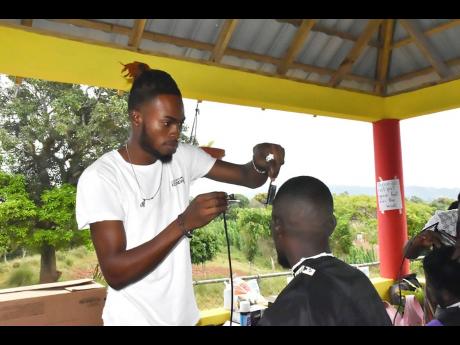 Rayon Duffus uses the airbrushing technique to apply colour to a customer’s hair. 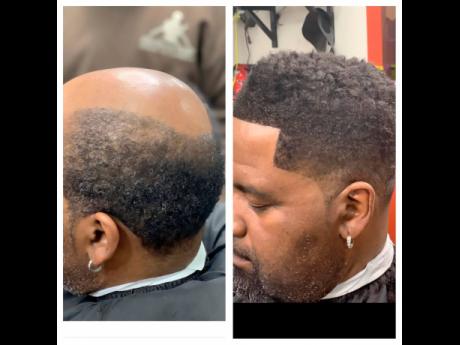 An example of man units on a customer.
1
2

Twenty-four-year-old Rayon Duffus is a barber on a mission. Though he has been cutting hair since he was in high school, he got his break in 2013, when Chris Diaz came to Jamaica as part of the LDJR Davis Foundation medical mission to Brandon Hill, Clarendon.

The mandate of the mission, now in its seventh year, was to offer free healthcare to the residents of the community, as well as to provide grooming for the men who needed it.

Diaz said when he started cutting hair for the mission, Duffus came to him with a friend and offered their help.

"I gave him guidance, helped him go to school, get his licence to cut and for the business, and set up a barber shop in the community. We have become great friends and I can say when I first met him he had some skills, but today I find him better than me," Diaz said with a proud grin.

Diaz, who is a native of New York, subscribes to the view that if the student does not become better than the teacher, then something is wrong with the teacher.

He taught Duffus various techniques, including fading and tapering, and one of the latest trends - how to install man units.

Man units are weaves for men and are now very popular among balding men in the US.

"Men no longer have to be bald. Now they have options. So if they are receding and want a cool hairline, we bald the centre out and use ghost bond (adhesive glue), plus braiding hair, track hair or a wig, to complete the process," Diaz said.

He said the three types of units last one to two weeks, the other can last one to two months, and the third can last three to four months. The glue holds it in place. The downside is that except for the one which lasts three months, it cannot be shampooed or it will fall out.

Duffus aspires to set up a branch of his barber shop, Elite Barber Parlor, in Ocho Rios.

He told CENTRAL STAR that having received two levels of certification from HEART, he is ready to set up another location.

"I train my brother Sean Duffus and I am also encouraging him to be certified. I have two persons working with me now and I benefit from the latest tools and supplies that the team (LDJR) brings each year," he said.

The Duffus brothers also give their service free to the mission annually.