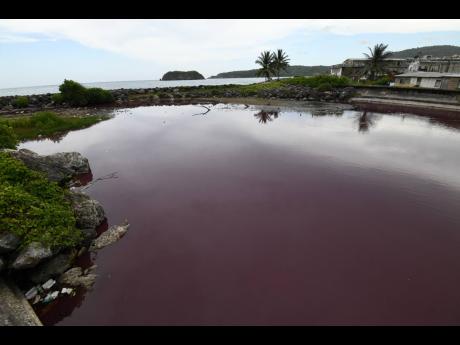 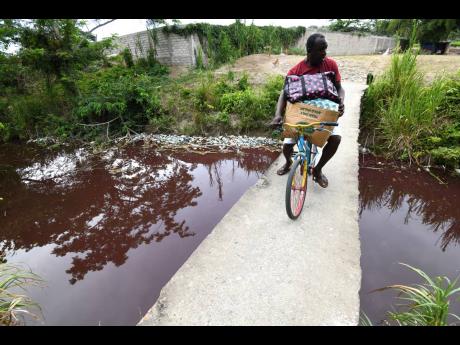 The Outram River in St Mary is now blood red, stagnant, smelly and is a breeding site for mosquitoes.

The National Environment and Planning Agency said that the mouth of the river was blocked off from the sea and that there was very little flow of water. The agency said that samples from the river were collected and tested and based on the results, they concluded that the discolouration is due to an algal bloom.

Barbara Beckford, of Cox Street, said that she was born and raised in the area and the water has been clean until late last year. She said that the colour over the period had changed from brown to purple, and since last Wednesday it had changed to a burgundy colour.

"People is assuming and a seh they throw paint in it, but how much paint you gonna throw in it for it to look like that? Sometimes it even have a funny smell; it is stink. There is no factory nearby that we know of, but they dump some stones behind the parish library. One time we would see wave coming up in the river when the sea rough, but we not seeing anything like that. So the river is not projecting into the sea any more. Something is seriously wrong," she said.

Hopeton Sinclair, a life-guard, boat driver and wind surf instructor, said that he has spent most of his time at sea and he is positive that the sargussum seaweed is the cause for the water discolouration.

"Dem block up the river mouth seh dem a channel sand because the sand use to come in and block the river mouth. The truck use to come and clear it and the sea water use to come in, so the river used to stay pretty, plus the rain fall so it pretty. From dem carry the heap a stone and carry it go dump up dung there, and turn the river mouth inna wah likkle beenie supm fi lead the water go pan one direction, we have been having problems," Sinclair said.