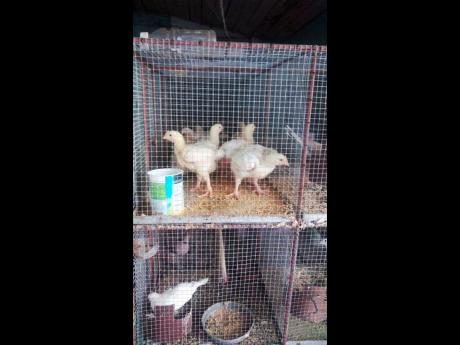 Some of Reid’s chickens.

Akeem Reid, 21, is financing his tertiary studies at the University of the West Indies (UWI), Mona, by raising chickens and selling them from his backyard.

Reid, a second-year accounting major at the UWI, told THE WEEKEND STAR that he would continue to raise and sell chickens while going to university, as this job funds his studies.

He’s positive that he will continue after completing university.

When he’s done with the school week, he puts on his entrepreneurial hat and takes on the weekend.

“I order the chickens on a Saturday from Pact Distributors on Lyndhurst Road, right beside RJR, and then I pick them up in like one week’s time,” said Reid.

He says it takes six weeks for a chick to fully mature, and for that six-week raising period, it costs him about four and a half bags of chicken feeding.

Reid says his parents are very supportive, as they assist in the “killing and cleaning process.”

He is now preparing 30 chickens for sale and didn’t have to look far for customers. Currently, his main buyers are people from his church and family friends.

He says he already had some cages in his backyard in which his father kept pigeons. He uses those cages now to house his chicks.