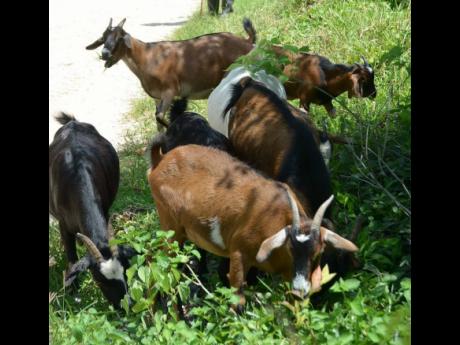 St Elizabeth farmer Owen Hewitt, who sold his car in 2003 and used the money to buy goats, suffered a devastating blow last Monday when crooks took three of his animals.

Hewitt told CENTRAL STAR that at the time of the goats' disappearance, they were pregnant. He said that the animals value more than $100,000.

"Dem come and tek them in the broad daylight. They were in St Mary's district, near to Munro College, grazing because a deh so mi farm deh. It look like them drive and pick them up," Hewitt said.

The 56-year-old farmer said it is not the first time that he has been burnt by thieves. He said that he had 60 goats at one point but decided to downsize his herd after six of his rams were stolen in one day.

"Mi did affi sell some before dem thief off all a dem, and now me start fresh. The last pregnant goat me have, she dead after three days of giving birth. Mi grow the kids until dem get big and can have kids of them own. Mi a try build up back my farm because mi did have five and dem come and tek three. It look like because the other two never have on no rope dem couldn't catch dem," he lamented.