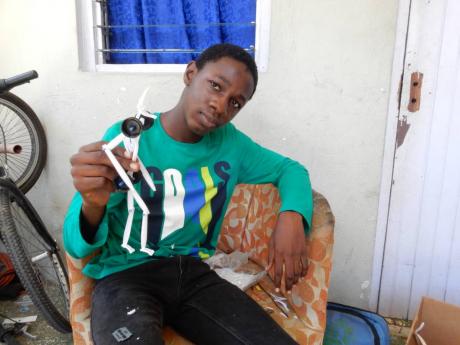 Kamal Christie shows off one of his stickmen. 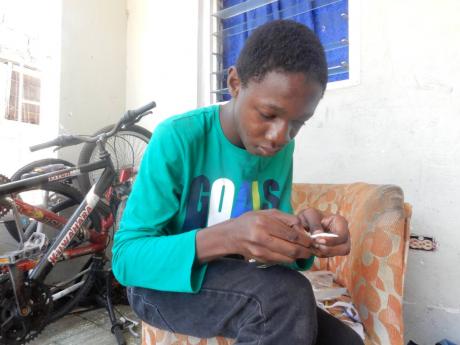 Christie works on the legs for a stickman. 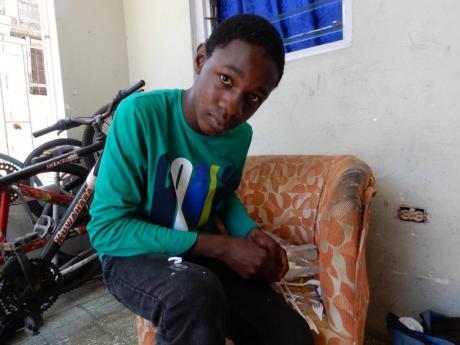 A glance into Kamal Christie's toy collection will leave one fascinated with the peculiar designs.

Some animatronics, some stickmen, and the stars of the lot, the Transformers (modelled after the popular cartoon of the same name), are all made from items you'd probably discard, like plastics forks, bottle tops, wires, and flexible hair rods.

But each toy is skilfully and intricately designed, imitating characters from the 14-year old's favourite games and cartoons.

Christie told THE STAR that it was a hobby that started out of necessity two years ago.

"Dem ya mi a play wid before mi even had a phone, these are my toys. Mi learn from one yute in the community to make the stickman and then mi just start do it," he said.

He said he worked to develop his skills, and has since expanded his collection.

On his verandah at his home on Cinnamon Crescent in Waterhouse, Christie spends his evenings designing and making his toys.

Christie has become so good at it, he can make a stickman in about an hour. He said that creating these toys is also an outlet for him, as he is often bullied in school.

"Sometime mi a try mek friends, but everyone wanna fight mi, so this just help relieve me of my stress when mi angry and so," he said. Christie said he wants to open his own toy store in the future.

"Mi want own a business, that's the only thing mi wah do. Mi wah create and sell toys," he said.

But for now, he has to settle with selling these creations in downtown Kingston on the weekends.

"Sometime I sell dem to foreigners, and sometimes regular people dem come wah buy it, and keep fi dem toys. I sell them for $150 and $300" he said.

He uses the profits from the sales to invest in more materials, and to treat himself.

"I am saving to buy a phone. I give my brother the money to save for me," he said.