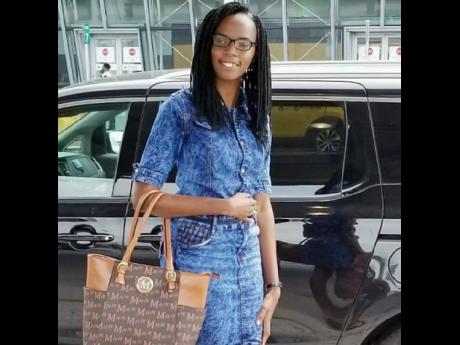 Defying the odds, overcoming the obstacles, and coming back strong are all parts of the life of Shauna-Kay Douglas, a visually impaired teacher of Blackwoods, Clarendon.

Douglas told THE CENTRAL STAR that her visual impairment had allowed for many challenges throughout her childhood, especially in her academic pursuits.

"I was born severely near-sighted, seeing about 60 per cent from one eye and virtually none from the other. Thus, I had multiple challenges getting around and seeing the chalkboard at school," she said. "Doctors are appalled at my ability to work with normal people and still do so well."

Douglas noted that she relies heavily on her memory to facilitate her daily routines, adding: "God has blessed me with a very good memory so when I enter a building for the first time, I would study the steps and the next time I enter that building, I would be flying up those steps."

Douglas, who holds a diploma in Spanish from the Shortwood Teachers' College, says she enjoys preaching and public speaking, the latter being a hobby which led to her being named the National 4-H Public Speaker in 2010.

"Whatever material I would be required to read in public, I would study the material from home and pretend to be reading when it was actually being done from memory. I preach from memory and do public speeches from memory," she said.

The Edwin Allen High School past student shared that the two most heart-wrenching experiences she encountered were the deaths of her parents, six years apart.

Douglas, who is currently pursuing a bachelor's degree at the Bethel Bible College, said her dream is to become a motivational speaker and coach.

"I am of the firm belief that we can all overcome challenges by finding the strategies that work and using them. It doesn't matter the pace, as long as we stay in the race," she said.