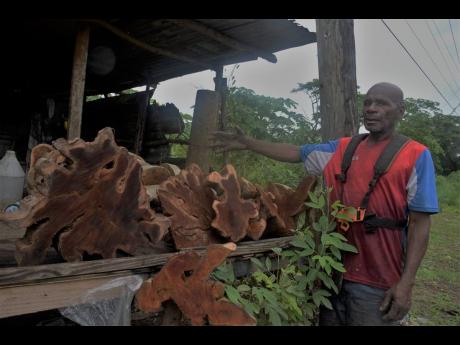 Lambert Archer shows off some of his curiously shaped pieces. 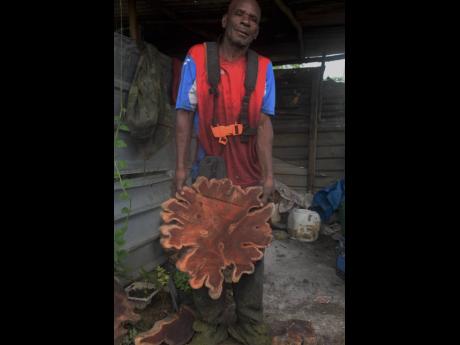 Archer said that persons use his creations as various pieces in their homes.
1
2

Lambert Archer has been burning coal for most of his life - 35 years to be exact.

But one day last year, when he was in the bushes cutting down logwood trees to burn, he had a revelation that was to change the course of his business.

"I went into the bush cutting coal wood and when I was there, I cut the wood and it look patternable. I said: I can't burn this wood. I was here burning coal with all a these pretty wood, and then is like a vision mi get bout di wood. So mi seh alright let me carry it on the streets and see if anybody would love it, and people love it," he said.

Archer, who lives and operates his business just outside of May Pen, has been selling his curiously shaped wood pieces since then.

And he said he has seen a steady increase in the profit he makes from his business.

His customers are from all walks of life, who all have a desire to add a unique piece of furniture to their home.

"Some people marvel still but some people buy it and use it for centre table and figurine and put it on their bed head or bed side table. A lady and her husband come and tek bout five pieces of the big one there" he said smiling.

And although he's grateful for his foundation in coal, Archer told THE STAR that far from being lucrative, it is also a hazardous profession.

"Coal send my children to school, feed them. But mi sell one bag a coal fi $1,000, and it tek nuff work too. I was so hungry; all I was burning coal it wasn't making no sense. Sometime di coal burn up, sometimes I don't get anything much out of it," he said.

He recalled that one day, the coal caught his hair on fire.

"Dat time I was a Rasta and a walk wid the fire pan mi head and neva know. A somebody seh: 'See di coal ketch a fire pan yuh head deh', and a when mi feel one drop pan mi shoulder mi know," he said.

The 63-year-old said he feels like he's struck gold with the logwood.

"I always put a piece on my shoulder and walk with it, whenever I go into May Pen town," he said.