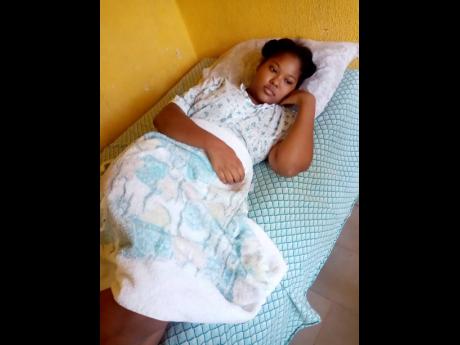 Clovis Williams is a desperate man. The fisherman from Old Harbour Bay is at his wit’s end as he tries to care for his 13-year-old daughter, Selena Williams, who is battling lupus.

Selena, who was featured in THE STAR in February, was first diagnosed at age 10. She is the youngest of Williams’ four children.

“Mi a tell yuh it tek weh everything from me. Sometime I don’t know where mi fi turn, but mi haffi just gwaan fight it. It hard sometime man, mi have the other little one dem weh mi send go school,” he said.

Since THE STAR story, Selena’s condition has worsened as the family still cannot afford the $600,000 medication that doctors prescribed months ago.

The ‘cheaper’ medication she takes come with debilitating side effects.

“The pill dem weh she a tek a now a damage her. She haffi a tek like 20-odd pill a day. Last Friday, dem give her wah medication, from that she just sicker. When she fi get up a problem; she cannot eat, she weak, har head a spin. She even faint out inna mi bathroom, bruk up the face basin,” he said.

Williams said a relative created a GoFundMe account on Monday to help pay for the medication.

He’s pleading for donations, as he just wants his daughter to have a chance at a normal life.

“It would be a joy just to take her off the pill dem weh a rotten her bone, her liver, her kidney. The last time mi do a liver and kidney test, the doctor seh it a affect dem,” he said.

Selena, who told THE STAR in February that she has had memory problems since falling ill, had to record her teachers’ lessons in class.

She said at the time that her teacher said she was “picking up really well”. But lately her school attendance has been affected.

“The last time she go school, she a come off the stairs and like her foot break and she drop. When mi carry her go do X-ray, dem seh the bone dem a get rotten. She go school like three times fi di week, and fi all a month after she cya go back,” he said.

Persons who want to assist Selena with her lupus medication can donate at https://www.gofundme.com/f/7q32h-funds-for-medication.