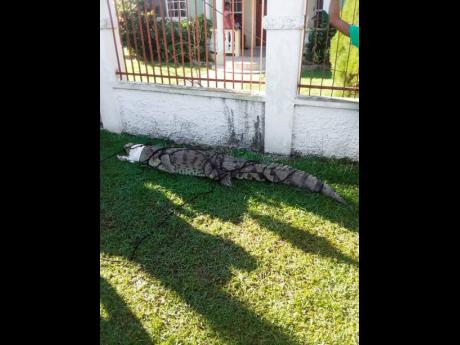 A large crocodile was captured along the Llandilo main road in Westmoreland.

Motorists travelling along the Llandilo main road in Westmoreland, Sunday morning received the shock of their lives when they came face to face with a giant crocodile, which blocked the main roadway, causing panic and mayhem in the community.

“ Mi heart nearly drop out a mi chest,” a taxi operator who gave his name as Mervin Green told THE STAR.

“Reporta, until now mi still a tremble, mi whole body nervous. Mi a drive down the road with the four women who mi normally pick up a morning time, and suddenly mi hear one a dem scream out. Mi only hear wen shi seh ‘A kind a monster that’, and wen mi look, a the giant crocodile, mi see stand up inna the middle a the road. Everybody panic and every car start reverse because wi neva deal with a crocodile before, only pon show mi see them,” Green said.

Another community member, who gave his name as ‘Blacks’, told THE STAR that he is living in proximity to where the crocodile was captured and that he is sure the reptile has been responsible for the death of his two dogs and some chicken.

“A jus wah day mi wake up and come see mi two big dog dem nyam up. Mi did think seh is another other dog kill dem, but mi notice some strange tracks leading inna the marsh behind mi house, and a now mi know seh a the crocodile did a eat dem. Mi even see say some a mi chicken dem eat off. Only the feather lef back, now wi know a who a the culprit,” he said.

Residents in the community say they were frightened to actually come face to face with such a large crocodile, adding that it was an experience of a lifetime.

Other community members say that this was not the first occasion that a crocodile was sighted in their area, but this giant one was the largest they have seen.

A massive crowd quickly gathered on the scene, and several young men from the community armed themselves with sticks and ropes while attempting to capture the crocodile.

It took the residents several hours to capture the reptile, having finally binded its mouth with a rope.

Representatives from the Wild Life Department came soon after and took the croc away.