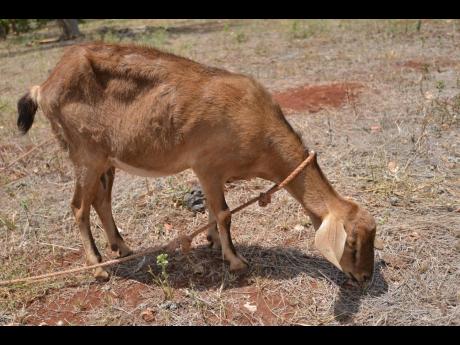 Colleagues of slain Savanna-la-Mar, Westmoreland, taxi man Kerry 'Schoolaz' Grant are questioning whether he may have been involved in predial larceny.

Grant's body was discovered in the presence of a herd of goats, with one of the animals tied to his leg, in a cane field in the parish on Monday.

A number of his colleagues are now wondering if the 38-year-old may have been caught stealing the goats and was executed on the spot.

However, others believe that he may have been killed in cold blood.

One taxi operator, who just gave his name as 'Blacks', told THE STAR that he has known Grant for years, and does not know him as a goat thief.

"A long time mi know 'Schoolaz', Missa Reporta. Him live wid him people dem a Shaolin district, and mi neva really know him as that type of person who go round the place and steal people animals," he said. "Wen it comes to young girl, a him dat. But mi don't know of him as mix up inna the animal thing. Although yu caa swear fi nobody nowadays, but him death look funny fi dem shoot him so and den tie goat pon him. "

Reports by the police are that on Monday evening, a cane farmer stumbled upon Grant's body lying beside his Nissan station wagon motor car, in a cane field. He summoned the police.

When the lawmen arrived, Grant was discovered lying in a pool of blood with gunshot wounds to his head.

The body was seen in the vicinity of a herd of goats, with one of the animals tied to one of his feet. The scene was processed, and the body removed to the morgue for a post-mortem.

The Westmoreland police say they have heard the allegations but they are still in the early stages of the investigation.