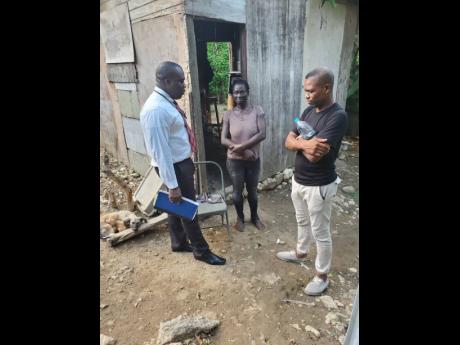 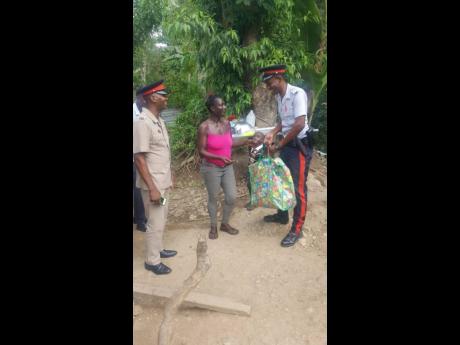 Members of the Annotto Bay Police Station in St Mary hand over some groceries to Karen Samuels, who was in need of help.
1
2

"A mi son alert me to the fire and by time mi grab him, mi never have time fi save anything else," Karen Samuels said as she explained that she watched her two-bedroom board house go up in flames in March this year.

The 46-year-old said since then, things have not been easy, as she has tried every means to get another house, but to no avail.

She now resides in a dilapidated board structure, barely held together by rusty nails and zinc.

"I don't work right now. I am a stay-at-home mom. I have no family support. I do hair now and again so that I can get money for my two kids to go to school, but it is not steady so that is why I have to ask for help," she said.

Her cries did not fall on deaf ears as Sergeant Christopher Ward, from the Annotto Bay Police Station, stepped in to provide some assistance.

Ward said he heard of Samuels' plight in October, after his fellow officers saw the conditions she and her children were living in

"Two of my constables were doing patrol and saw her. I was at the station at the time. Because of my community orientativeness they saw me and said, 'Sarge, we just see this lady while on patrol and we have to help her because she need help'," Ward told THE WEEKEND STAR.

He said he was saddened by what he saw, as the board structure was in shambles and the floor was only dirt. He said after talking with the mother of two, they prayed with her and gave her what they could at that time.

After the visit, Ward said he set out to get help for the family.

"We left and sought help for her and posted it on Facebook, trying to get some assistance. While the house situation has not been addressed as yet, we ensure that she get food, and we are trying to draft up something so we can get an assessment done for her to get at least a two-bedroom house. We want to coordinate all efforts. She has serious sanitation issues that need to be addressed and if it is not, it can have some serious health implications. So we are trying our best.

"The police and the community have given what they can. Not only officers in St Mary, but other police personnel from St Ann," he said.

With Christmas only weeks away, Ward said that he and his team are hoping to have Samuels and her family in a new home by then.

"I really want to see if we can get this done for the Christmas holiday. So even if we can't reach two rooms, I would want her to have at least one room. I am championing the cause to improve her life," he said.