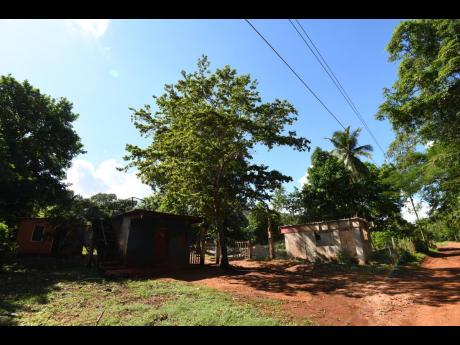 A section of Victoria Town, Manchester.

October 18 was a regular day for Mary Jane* and her mother, until they returned home from the grocery store about 6:30 p.m. to discover that their wall-mounted television was missing.

"When wi come home, wi see the back door open but mi think a close mi never close the door good, so mi push and go in. But when mi go in, all mi see a the spot pan the wall. Now all mi have is a big-back TV which part mi flat-screen used to deh," she said. An HP laptop which, she said, was hidden under her bed was also gone.

It was not the first that thieves had come to her house, but it was the first they had entered her dwelling.

"Dem come and steal plants and flowers, anything they could find around the house, but dem never come inna the house. It look like a sup'm dem a plan long time, because mi laptop did even under me bed and dem tek it. Dem tek mi bathroom mat too," she said.

Residents in Victoria Town, Manchester, where Jane resides, told CENTRAL STAR that the community is usually quiet, but it is plagued with thieves.

One resident, who wished not to be named, said that praedial larceny is the number one problem the community faces.

As the news team went through the community, residents told of a woman who had moved to the community recently, and thieves broke into her house and took her refrigerator.

"She new to here, so not much people know her, but the man dem go inna har house and tek out har fridge. Dem nah play round here," the resident said.

Checks made at the Asia Police Station revealed that praedial larceny is one of the major problems faced in that area; however, house break-ins are less frequent.