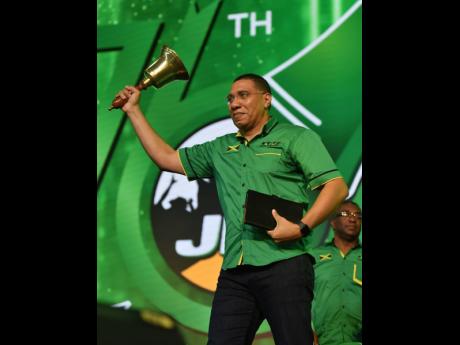 Very soon we will have everything in place, and when everything is in place, you will see me reach for this bell – Prime Minister Andrew Holness, leader of the Jamaica Labour Party.

Labourites have been placed on general election watch by Jamaica Labour Party leader Andrew Holness and his predecessor Bruce Golding, who urged them to "Mek sure yuh have oil in your lamps".

Holness, whose job it is to name the election day because he is the prime minister, said the next general elections are "not too long to come, but we not there yet".

His party was elected to office by the narrowest of margins - one seat - in the 63-seat House of Representatives in February 2016. The margin increased to three seats following two by-election wins, one in South East St Mary and the other in East Portland.

Speaking at the JLP's 76th annual conference at the National Arena yesterday, Holness told Labourites that the Government has widebase national and international support, and has been working for the people of Jamaica.

"Very soon we will have everything in place, and when everything is in place, you will see me reach for this bell," Holness said.

He even invited North East Manchester Member of Parliament, Audley Shaw, on stage to deliver, in a rather comical fashion, a message to the people that they should keep their eyes and ears open for the naming of the next election date.

"Cock up yuh foot and get ready for the second term," Shaw said.

Among the persons anticipating the date is Golding, who told Labourites that while he does not know when Holness will ring the bell for general elections, "It can't be long from now".

He recalled that in 2006, when the JLP was in opposition for more than 17 years, he addressed conference as leader and told Labourites that their days in the wilderness would soon end.

"I remember you asked me, how long, I said to you, not long. You asked me how soon, I said to you, soon soon. ... This time I have the same confidence that I had then that Andrew Michael Holness is set to lead this party into the second term of Government whenever the next elections are called," Golding said.

"Now, I don't know what is in Andrew's mind ... but as we approach the final year of this first term, let us realise, it can't be too long. If it is not soon, soon, it won't be long, long.

My charge to you today, get ready. Mek sure yuh have oil in your lamps and make sure that your wicks are well trimmed," Golding said.