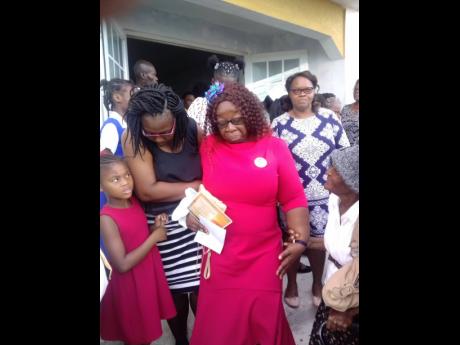 Cassandra Campbell, mother of 13-year-old Celene Campbell, is consoled as she leaves the funeral for her daughter. 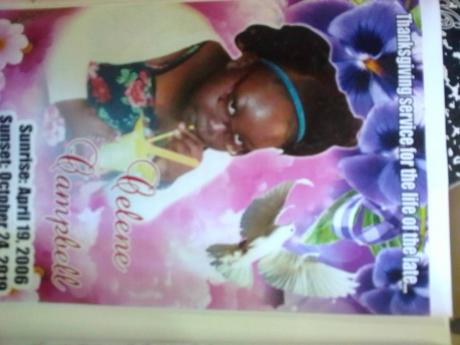 The programme for 13-year-old Celene Campbell, who died as a result of dengue.
1
2

Fam ily, friends and well- wishers came out in dr oves to pay their final respect to 13-year-old Celene Campbell, who died after being diagnosed with dengue fever a little more than two weeks ago.

Several mourners told THE STAR that despite the day being a sombre one, they are calling on the Government to address the outbreak of dengue with more concern.

Juliet Grant, leader of the Eagle Path Finder’s club of which Celene was a member, said that fogging alone cannot be the answer to the epidemic.

“Celene has been suffering from fever-like symptoms for a very short period. She took ill on October 22, and died two days later on October 24. We then learnt that it was dengue. I am calling on the Ministry of Health and the Government of Jamaica, please do not allow anymore of our young children to die of this dreadful disease. We need you to come forward and help to alleviate this problem, because honestly I really don’t think fogging is really effective,” she said.

At just 13 years old, Celene was already considered a young stalwart in her community. She was also one of the top students at Rusea’s High School, having recently been presented with the Principal’s award for excellence.

“A long time the Government know seh dengue deh bout, and dem come forward and seh dem ready fi it. But now that the dengue hit wi, everybody si seh the Government never ready at all, and until now dem still nuh ready. If wi nu stand up strong, all a wi pickney dem dead off,” an angry relative expressed to THE STAR.

Another added that the Government’s nonchalant attitude to the many dengue deaths is cause for concern.

“All the hospital and clinic dem a do is give people local pill. So seet deh now, mi lose my little cousin, and a nuff more little pickney mi hear bout weh dead. All the government people dem a do a deh tell you fi rush go a hospital, yet no medicine nuh deh a hospital fi fight dengue,” she said.

Cassandra Campbell, Celene’s mother, was too grief-stricken to comment, but in her remembrance of her daughter, she described Celene as her tower of strength.

The case of 13-year-old Celene dying from dengue is just one of many untold stories.

Just a week ago, 50-year-old Reymond Deans, of Sammy Bush in Springfield St James, took ill and was taken to the Cornwall Regional Hospital, where he was diagnosed with dengue fever and admitted.

A day later, his body was found under a bridge, miles away from the hospital.

A senior nurse confirmed to THE STAR that dengue can affect a person’s mental state.