May Pen Market gutted by fire 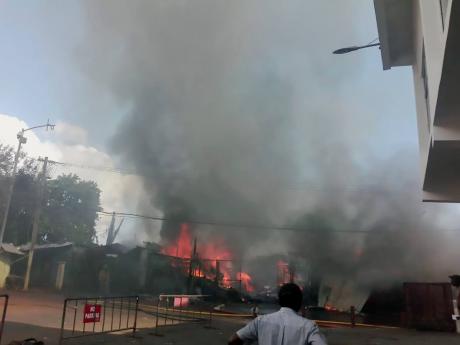 With just three weeks to go before Christmas, ‘Miss Patsy’ watched helplessly as the May Pen Market was transformed into a furnace.

Miss Patsy, who has been selling her wares for over 40 years, cried hopeless tears as she saw her stock and holiday profit turn to glowing embers.

She was not alone. Dozens of others whose livelihoods were interwoven in market life were gutted as they looked on helplessly as a roaring fire engulfed the Sevens Road facility yesterday afternoon.

Firefighters fought the blaze for more than three hours, but they were no match for the furious flames.

One fire unit tackled the blaze but ran out of water and left the scene. The fire truck returned later with reinforcements from private water truck operators, Juici Patties and Triple T’s Trucking, which sought to assist the crew in preventing the blaze from destroying the neighbouring May Pen Primary School.

Doreen McKenzie, a vendor, who has been operating in the May Pen Market for the past 16 years, told our news team that she lost everything in the blaze.

Central Clarendon Member of Parliament Mike Henry said he was awaiting an assessment of the damage before making a decision on the way forward. The MP stated that he had already had dialogue with May Pen Mayor Winston Maragh and the Ministry of Local Government and Community Development.

Councillor for the Denbigh Division, Joel Williams, said the destruction of the market occurred at the worst possible time, when vendors would seek to tap into the Yuletide shopping season.